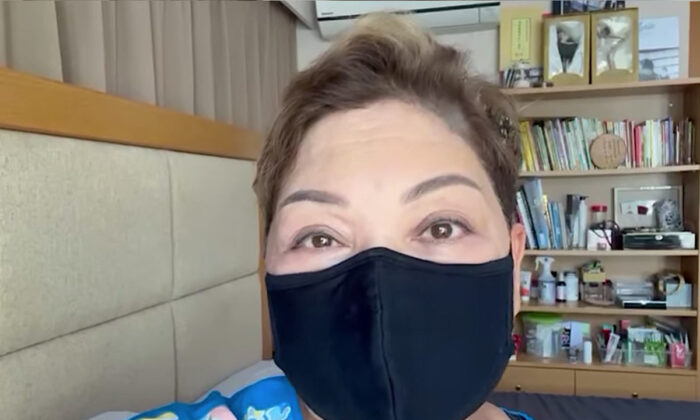 HK artist Maria Cordero said, in a video she uploaded to her Facebook, that she was surprised to be infected. (Screenshot of Maria's Facebook)
Hong Kong

Maria Cordero, a well-known Hong Kong artist, more commonly known as “Fat Mama” in Hong Kong, was recently diagnosed with COVID-19. She has previously received four shots of China’s Sinovac vaccine. Although by now her fever has subsided, she has not fully recovered yet.

Maria is a Hong Kong singer, actress, and cooking show host. She is 68 years old now. On June 24, 2022, Maria announced on her Facebook page that she had been diagnosed with the virus. She said through a video clip that she was still normal the day before, and had gone out to the mountains, exercised, shopped around and dined outside.

On the 24th, after she got up and before going out to the mountain again, she felt a little headache, and the result of the rapid test was positive. After that the headache became increasingly serious. She has notified the government immediately and started quarantine at home, avoiding contact with family members and domestic helpers, also telling them not to go out.

She also said in the same video clip that she is “an extremely careful person.” She has a quick test every day, and always wears a mask when she goes out. With all such good practices in place, she is still puzzled by how she could be infected with the virus. Maria said many times, “It’s really, really unexpected.” She urged everyone else to be more careful in order to stay safe.

As of June 27, Maria said on Facebook that her fever had subsided, but she still coughed badly and that happened even during gasping. She felt that was one hell of a nasty experience. Anyhow she did take the chance to thank everyone for their concern.

Maria received her fourth dose of the China made Sinovac vaccine two months ago. At that time, she even uploaded a photo of the injection process on Facebook and gave it a thumbs up.

In recent years, she has actively participated in lots of pro-CCP (Chinese Communist Party) activities, including presiding over police rallies during the “anti-extradition” movement, and co-signing support for the Hong Kong National Security Law. In March this year, she visited Hong Kong’s Tsing Yi “Fangcang” shelter hospital as a delegate of China’s rubber stamp legislature, and boasted that the hospital’s environment was “better than a private hospital.”

There are all sorts of Omicron variants currently circulating around the world. A study by Yale University found that the full inoculation of Sinovac vaccine would be ineffective against the Omicron variant. The results were published in the medical journal Nature Medicine in January 2022.

Researchers from Yale University in the U.S. and the Dominican Republic analysed the serum of 101 volunteers from the Dominican Republic. The results showed that no antibodies for neutralizing Omicron were detected in those who received two doses of Sinovac vaccine. And those who received the messenger ribonucleic acid (mRNA) vaccine and booster shots made by Pfizer-BioNTech had a 1.4-fold increase in antibody levels against Omicron.

The paper also said that those who received Pfizer-BioNTech booster after two doses of Sinovac vaccine, produced antibodies at levels similar to that produced after receiving two doses of the messenger ribonucleic acid (mRNA) vaccine.

The University of Hong Kong and the Chinese University of Hong Kong also published similar findings in December 2021. In their study they tested two batches of 25 people, The first batch of 25 had received two doses of Pfizer-BioNTech vaccine, and only five people’s serum contained neutralising antibodies to Omicron “and the vaccine efficiency was significantly reduced to 20 – 24 percent.” For the twenty-five people who received two doses of Sinovac vaccine, none of their serum could neutralise the Omicron virus. The study also found that the antibody level after three doses of Pfizer-BioNTech vaccine was sufficient to protect against Omicron, while the antibody level after three doses of Sinovac vaccine did not provide sufficient protection.