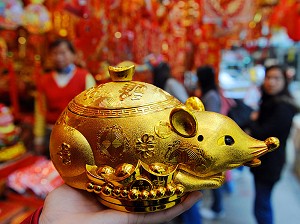 According to the Chinese lunar calender, 2020 is the Year of the Rat. (Getty Images)
China

Welcome the Year of the Rat

According to legend, the Chinese calendar began during the reign of the first Emperor, Huangdi (2698-2599 BC). The first hints to calculate auspicious dates have been found early in history, inscribed on oracle bones and turtle shells. These were primarily used to calculate the correct times to honor deceased kings from Huangdi's dynasty. The calendar also served to fix the date of the New Year.

Combining the Solar and Lunar Calendars

This year, the Chinese New Year falls on February 7th of the Gregorian calendar. In Chinese tradition, it is the Year of the Rat. The precise date is determined by the Chinese Farm Calendar, which is based on the cycles of the sun and moon, which operate according to astronomic principles and events.

The lunar calendar divides the year into 12 moon phases. One phase—a month—is the time span the moon needs to travel around the earth—from full moon to full moon. One cycle represents approximately 29.5 days. Thus, a lunar year is only 354 days. The lunar calendar can determine the phases of the moon, but not the seasons.

The solar calendar, with its length of 365 days, tracks the seasons. This is the reason for the discrepancies in the calendars, which can be the difference of a day, or even a month—this brings the lunar and solar calendars into synch.

The Chinese calendar operates according to a 60-year cycle, made up of ten 天干 ( tiangan —The Ten Celestial Stems) and factors in five changing phases as well as twelve 地支 Earth dizhi (12 geological factors). The latter are better known as the 12 Chinese animal symbols.

This 60-year cycle dates back to the 13th Century B.C. Present-day Chinese still use the 12-year animal cycle for Chinese astrology. Our year 2008 is year 4,075 according to Chinese calculations—this equals the 78th sixty-year cycle. Thus, February 7th is the onset of “Earth and Yang” and the 25th of this year's geological factor, “Rat.”

The Rat Determines What Happens in 2008

According to legend, the Buddha had invited all the animals in his universe to the upcoming New Year's festival. But only twelve of them heeded his invitation: the rat, the ox, the tiger, the rabbit, the dragon, the snake, the horse, the goat, the monkey, the rooster, the dog and the pig. They answered the invitation more or less quickly, according to physical size.

The rat fell somewhat behind. She asked the ox, who was a latecomer, to let her ride on his back, so that she might arrive at the New Year's festivities on time. The ox, an accommodating fellow by nature, took the rat on his back and outdistanced all the others. When the pair arrived at the Buddha's place, the rat jumped off the oxen's back and was thus the first guest in the Buddha's presence. That is why she is first in the cycle of the 12 animals.

Out of gratitude for the animals who accepted his invitation, he presented them with a gift—for each of them to rule for one year and to have them determine the fate of things to come.

The Last Days of the Old Year

Preparations for the New Year's festival customarily begin two weeks prior to the day itself.

According to tradition, the 20th day of the 11th month marks the onset of housecleaning with bamboo branches, followed by decorating the home. Many households color their lamps a bright red hue; red streamers featuring all kinds of New Year's inscriptions in jet-black ink are hung about the house. These streamers are fastened onto the front door frames, but turned around, so the writing won't show until the right day. People commonly renew both themselves and their homes every New Year: the inside of the home will be freshly painted; people buy new clothes and shoes; they visit the hairdresser and barber.

Many people honor the age-old practice of offering the kitchen god sweet, sticky rice. According to legend, the “old” kitchen god leaves the home seven days prior to New Year, to report to the Jade Emperor what happened in the family during the past year, and how everyone behaved. The sweet rice is supposed to entice the kitchen god to report only favorable events. Four days after the beginning of the New Year, the kitchen god returns to the family, who greet him with offerings of fruit and tea.

The family gets together for an elaborate feast the last day of the old year, New Year's Eve. According to custom, chicken and fish are served, but not all of the fish is consumed. Children are presented with 紅包 hong bao, red envelopes containing money. Hopefully, the kitchen has prepared the traditional 餃子 jiaozi, Chinese dumplings, for the following day.

Prior to the onset of the New Year at 11:00 p.m.， people leave their homes, taking with them all vestiges of the old year, and only return only after 11:00 p.m. to open the windows, letting in good luck for the year to come. According to tradition, fireworks then begin a ruckus that lasts until the wee hours of the morning. Following are some photos from various places in Asia showing the joyous scenes of the celebration.

The Epoch Times wishes everyone a happy and safe Year of the Rat!