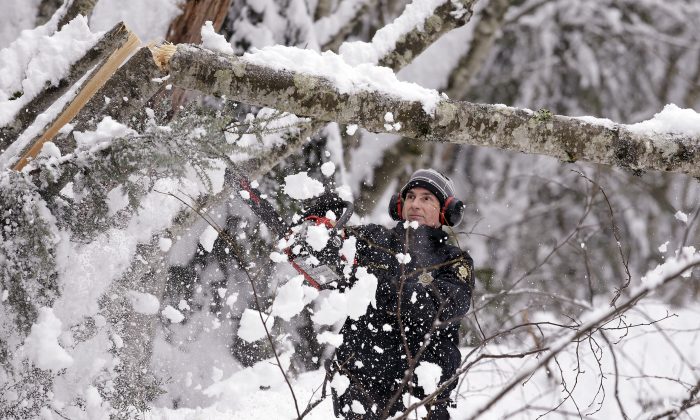 King County Sheriff's Deputy Peter Linde, a member of the county's search and rescue unit, uses a chainsaw to clear a partially fallen tree blocking a road Tuesday, Dec. 22, 2015, at Snoqualmie Pass, Wash. Linde said that a small group of hikers, who were without snowshoes, were in need of assistance in getting out of the area after a heavy overnight snow there. (AP Photo/Elaine Thompson)
US

SEATTLE—A weather pattern partly linked with El Niño has turned winter upside-down across the United States during a week of heavy holiday travel, bringing spring-like warmth to the Northeast, a risk of tornadoes in the South, and so much snow across the West that even ski slopes have been overwhelmed.

In a reversal of a typical Christmas, forecasters expect New York to be in the mid-60s on the holiday—several degrees higher than Los Angeles.

The mild conditions have helped golf courses in New England do brisk business, but the pattern comes at a steep cost for ski resorts that have closed and for backcountry skiers who confront avalanche risks. And many Americans complain that it just doesn’t feel like the holidays without a chill in the air.

“It’s been a great snow season so far from the Rockies to the higher elevations in the Cascades and the northern Sierras, and it’s been the total opposite on the East Coast,” said Bob Oravec, lead forecaster with the National Weather Service.

Big parts of the county are basking in above-average temperatures, especially east of the Mississippi and across the Northern Plains. Record warmth was expected on Christmas Eve along the East Coast, Oravec said.

He laid the credit—or blame—with a strong El Niño pattern, the warming of surface waters in the Pacific Ocean near the equator. That’s helped drive warm air west to east across the Lower 48 and kept colder air from the Arctic at bay, he said.

In the Pacific Northwest and California, the effects of El Niño haven’t really hit yet. They’re typically seen in January through March, and the heavy rains and snows in the region are probably not linked to the phenomenon, said Washington State Climatologist Nick Bond.

The winter in the Pacific Northwest is still predicted to be drier than normal, so the series of storms that dumped feet of snow in the Cascades this month and piled the snowpack back above normal, were helpful, he said.

Come summer, farmers and salmon alike will rely on that melting snow.

In Washington, authorities have closed the state’s main east-west route, Interstate 90, over the Cascade Mountains repeatedly this week due to heavy snows and avalanche danger. Officials closed a sledding hill near Snoqualmie Pass on Tuesday, Dec. 22, because the storm kept the state Transportation Department from plowing the parking lot. On Sunday, a heavy storm closed Oregon’s Mount Ashland Ski Area when it knocked out power.

California is in its driest four-year span on record, and experts anticipate a possible fifth year of drought. Weather forecasters say a strong El Niño weather system could drench the state, but one good, wet winter won’t be enough to rehydrate the parched land. A fresh round of chilly rain was expected to hit San Francisco late this week. The same system was expected to drop some 4 feet of snow in the Sierra Nevada Mountains.

While ski resorts celebrated a deluge that threatened to drop almost 2 feet of snow in parts of Colorado’s mountains, forecasters warned of serious avalanche risks.

An avalanche near the Montana–Wyoming state line on Sunday, Dec.  20, buried three snowmobilers, killing a 33-year-old North Dakota man. Another avalanche partially buried a ski patrol employee at the Snowbasin resort, about 45 miles north of Salt Lake City, and two snowboarders were caught in a backcountry slide southwest of Breckenridge Ski Area on Saturday. They escaped serious injury.

The most recent storm had raised the level of Lake Tahoe by about 2 inches since midnight Monday—that’s nearly 64 billion gallons of water.

“We’re giving our generally weak snowpack a very large and rapid load, and it’s unlikely to be able to hold up,” said Brian Lazar, deputy director of the Colorado Avalanche Information Center. Warnings and advisories were posted for much of Colorado’s high country, with an emphasis on the risk of large, dangerous slides in steep terrain.

Meanwhile, the National Weather Service said the most recent storm had raised the level of Lake Tahoe by about 2 inches since midnight Monday. Officials calculated that that’s nearly 64 billion gallons of water.

Elsewhere, severe thunderstorms and possible tornadoes were forecast for Wednesday in northern Alabama, northern Mississippi, and western Tennessee. Tornadoes are not unheard-of in the region in late December, but the extreme weather, driven by warm temperatures and large amounts of moisture in the atmosphere, was nonetheless striking, he said.

With such balmy temperatures in the Northeast, Pine Oaks Golf Club in Easton, Massachusetts, is probably having its busiest December since it was built more than 50 years ago—a bonus for a club that doesn’t count on much winter revenue.

“We’ve got 65 degrees coming up on Christmas Eve,” said Scott Ibbitson, a golf specialist at the course. “It’ll be our busiest December day ever.”