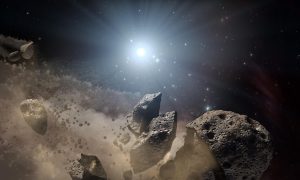 A visitor to the Coral Castle will see a stone fantasy garden with carved coral stones and blocks weighing several dozen tons each. The mystery of the garden is not in the blocks themselves but in how they were carved and put into place.

This feat of engineering was accomplished entirely by one man—Edward Leedskalnin—who carved, transported, and set all of the stone slabs and blocks by himself with no help or modern machinery. He used only hand tools he bought from a junkyard. Additionally, the blocks are cut and set with intricate precision, locked into place without mortar.

Leedskalnin, born in Latvia on Aug. 10, 1887, was a quiet, private man who was just over 5 feet tall, weighing just over 100 pounds. He somehow managed to carve and sculpt more than 1,100 tons of coral rock, transporting the rocks 10 miles and setting them into place using only a crude wooden tripod, a borrowed tractor, and a truck.

All of his work was done during the night between midnight and 6:00 a.m., according to the documentary Mystery at Coral Castle. Whenever someone would try to catch a peek at his work, he would stand upon his watchtower and announce: “As soon as you leave, I will continue my work.”

People could see the blocks being transported down the highway, but no one ever saw Leedskalnin move, lift, or set any of the blocks. The only witnesses are two children who supposedly saw Leedskalnin “float” the blocks into place like moving balloons. The mysterious man was also known for his extensive theories on magnetism.

Another particular oddity of the castle includes a 9-ton swinging stone door that moves when just a little force is applied; a child could move it with ease. A raised obelisk weighing 28 tons is another curious feature, as well as a carved stone crescents sitting atop 20-foot high walls.

The story regarding the inspiration for the Coral Castle is that of a tragic romance. When Leedskalnin was still a young man, at the age of 26, he was engaged to a woman who left him the day before they were to be wed. Leedskalnin vowed to create the structure as a symbol for his love for her.

The stones were quarried near his original home in Florida City. After a developing subdivision threatened his privacy and the privacy of the Castle, he bought property in Homestead, Fla., just 25 miles from Miami, and moved all of his pieces over the course of three years.

Leedskalnin started the endeavor in approximately 1923 and finished around 1951. Through the ‘40s up until his death in December of 1951, he would charge 10 cents admission for visitors to his castle and garden.