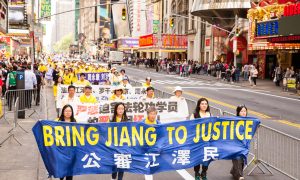 Several Chinese lawyers, scholars, and dissidents have recently announced their support for a campaign by Chinese citizens to bring former Communist Party leader Jiang Zemin to justice for crimes against humanity and genocide.

The latest backer of the phenomenon is Wei Jingsheng, the veteran Chinese human rights activist and democracy advocate. Wei became prominent after he was imprisoned for nearly two decades for petitioning the Chinese regime to introduce democracy in China in 1979—only two years after the conclusion of the tumultuous Cultural Revolution—and is often referred to as the father of the Chinese democracy movement.

In an interview with Epoch Times, Wei said that he “fully supports” the filing of criminal complaints through the regime’s own legal channels against Jiang for persecuting Falun Gong.

When he was Chinese leader in 1999, Jiang launched a personal crusade to “eradicate” Falun Gong, a traditional Chinese spiritual exercise practice that incorporates moral teachings. The persecution included a Cultural Revolution-style hate campaign, imprisonment of hundreds of thousands, brainwashing, torture to disability and death, and organ harvesting.

Wei says the persecution of Falun Gong violates China’s constitution, which guarantees freedom of religious belief, and freedom of speech. Torturing detained practitioners also breaches Chinese criminal and criminal procedure law, which states that it is an offense to abuse both suspects and the sentenced.

If China today is truly not a “lawless society,” then Jiang and all individuals involved in the persecution “should be investigated in accordance with the law,” Wei said.

Over 80,000 Falun Gong practitioners from China and around the world have submitted criminal complaints to China’s highest prosecuting body and the courts after a legal reform in May made it compulsory for those institutions to accept and acknowledge all legal complaints, or issue written note detailing the reasons for rejection.

Because “Jiang was able to commit so many atrocities because he had the backing of the Communist Party,” Wei suggests that the next target for legal action should be the Party itself.

“We’re demanding a legal solution,” Wei said. “This will be our position until the collapse of the Communist Party.”

And should the Party’s collapse, “every single person” who was involved in persecuting Falun Gong must still “face trial in a real court.”

With reporting by Li Chen-mei