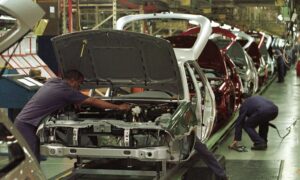 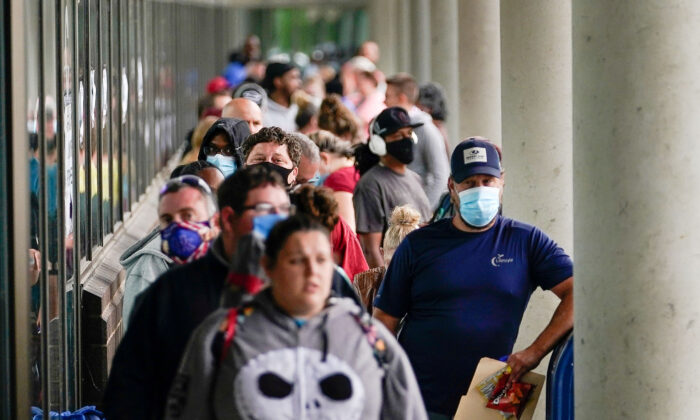 The number of American workers seeking state unemployment benefits last week blew by expectations to 965,000, a figure not seen since August 2020 and a historically high amount that points to a labor market plagued by the pandemic.

The Labor Department said in a Jan. 14 report (pdf) that the number of people who filed initial state benefit claims last week grew by 181,000 from the previous week’s revised level of 784,000. Economists polled by Reuters predicted the jobless claims number would tick up slightly to 795,000; the Labor Department’s report sent a ripple of surprise across the desks of experts.

“The rise and level of new unemployment claims is shocking, at the highest point seen since late August,” Bankrate.com senior economic analyst Mark Hamrick said in an emailed statement to The Epoch Times.

“This reminds us that the economic crisis has not gone away, far from it, at a time when multiple crises have been vying for our attention. It hasn’t helped that administration of COVID-19 vaccines has been slow to gather momentum since the pandemic is at the epicenter of the economy’s ills,” he added.

The renewed surge in virus cases has caused millions of consumers to avoid traveling, shopping, and eating out. States, meanwhile, have imposed new restrictions on restaurants, bars, and other businesses. These dynamics likely pressured businesses to slash jobs.

Unemployment claims were also likely lifted by reapplications for benefits following the government’s renewal of a $300 unemployment supplement until March 14, which came as part of the $900 billion pandemic relief passed at the end of December.

“The depth and duration of this downturn, now 43 weeks long, demand further fiscal response on the part of elected officials in Washington,” Hamrick said.

Lawmakers have signaled more pandemic relief is on the way. Senate Democratic Leader Chuck Schumer (D-N.Y.) said on Jan. 12 that one of the top priorities for a Senate under Democrat control would be to pass more emergency COVID-19 relief. The Democratic caucus is poised to renew the push for $2,000 direct payments, as well as more aid to state and local governments, among other priorities.

The Jan. 14 Labor Department report also showed that the number of people who are receiving regular state unemployment aid grew by 199,000 to 5.3 million. The total number of American workers claiming unemployment benefits in all programs nationwide was 18.4 million for the week ended Dec. 26, 2020—about 16.2 million more than in the comparable week a year ago.

While jobless claims have dropped from a record 6.9 million in March 2020, they remain above their 665,000 peak during the 2007–2009 Great Recession. Economists say it could take several years for the labor market to recover from the effects of the pandemic.