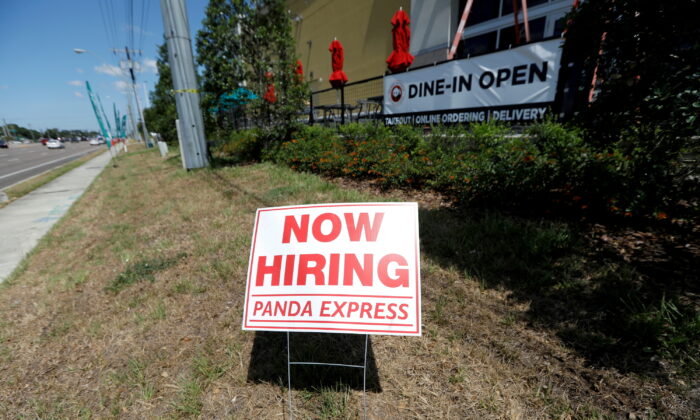 The number of American workers applying for unemployment benefits fell last week to a new pandemic-era low, suggesting further tightening in the labor market as businesses boosted wages to attract and retain staff.

First-time filings for unemployment insurance—a proxy for layoffs—came in at 267,000 for the week ending Nov. 6, the Labor Department said in a report (pdf).

Continuing claims, which run a week behind the initial filings figure and reflect the total number of people receiving benefits through traditional state programs, rose by 59,000 to 2.16 million.

The headline Consumer Price Index (CPI), a measure of inflation from the perspective of end consumers of goods and services, surged by 6.2 percent over the year and 0.9 percent over the month in October, according to a Nov. 10 report from the Bureau of Labor Statistics. That puts the pace of over-the-year consumer price inflation at its highest level since December 1990, when it rose by 6.3 percent.

At 0.9 percent, the over-the-month pace of inflation is the highest since June 2021, which at the time was the fastest rate since 2008.

“When household costs rise faster than income, it puts the squeeze on buying power, which in turn holds back economic growth,” McBride said.

The U.S. economy expanded at a lackluster 2 percent in annual terms in the third quarter, the Commerce Department said in an Oct. 28 release. The deceleration from the 6.7 percent rate of GDP growth in the second quarter was driven chiefly by a slowdown in consumer spending.

The decline in new infections in the United States has leveled off recently, raising concerns about a possible seasonal wave that could dampen economic growth.

“Any elongation of the pandemic and mitigation measures will prolong the supply-side recovery and further risk structural damage to the labor force,” Nick Reece, portfolio manager at Merk Investments, told The Epoch Times in an emailed statement.

“We know from other recent data that the rate and number of individuals quitting their jobs have been at record levels,” Bankrate Senior Economic Analyst Mark Hamrick told The Epoch Times in an emailed statement. “A key question of the day is whether or when will these workers return, helping to address worker supply challenges.”