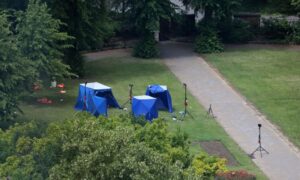 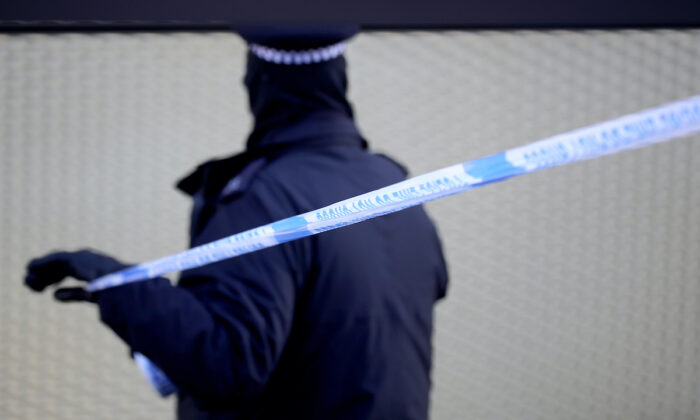 In this file image a policeman sets up tape at a crime scene in London on April 5, 2018. (Christopher Furlong/Getty Images)
UK

A spate of separate violent stabbings in London over the weekend has led to the deaths of two people and left a further 14 injured.

Over the course of the weekend, police officers were called to deal with incidents in over five areas of London, with extra police officers being deployed across the city in support, the Metropolitan Police said.

Murder investigations are also underway after two men were stabbed just over 24 hours apart in Croydon and Kilburn.

The wave of violence, which spread across the nation’s capital, began on Friday evening, with police called to two stabbing incidents at around 7 p.m. An hour later, a 22-year-old male was stabbed to death in a block of flats in Wisbeach Road, Croydon. The young man has not yet been identified.

“We know that a group of males attended the address and an altercation occurred which resulted in the victim receiving a fatal stab injury,” Detective Chief Inspector Martin Thorpe said in a statement.

The second man, Sven Badzak, was fatally stabbed at around 5:30 p.m. on Saturday in Kilburn after he and his friend were involved in an altercation with a group of men, police said. Badzak was taken to hospital where he later died of his injuries.

“At this early stage we believe Sven and his friend became involved in an altercation with a group of males,” Detective Chief Inspector Darren Jones said in a statement.

“As this group chased the pair, Sven and his friend became separated. Sven fell to the ground and was attacked by a number of the group. His friend was also attacked but managed to seek sanctuary in a shop. However, he remains critically ill in hospital.”

Speaking to the MyLondon local news site, Badzak’s mother said he had just gone out to get some shopping.

“He was the most polite boy you could possibly imagine. The perfect manners. … He was beloved by everybody,” she said.

“He always asked people how their day was, how their family is, if he could do something for them.”

No arrests have currently been made in either murder investigation.

On Friday and Saturday, police also had to deal with further stabbings in Croydon, Streatham, Chislehurst, Coulsdon, and Pimlico.

On Sunday afternoon, a 20-year-old man was stabbed in Hindes Road, Harrow, and is currently in a life-threatening condition.

So far, four arrests have been made in connection with stabbings in Croydon and Coulsdon, police said.

All incidents currently remain unconnected. None of the other victims had life-threatening injuries according to the police.

On Monday, the Home Office announced £35.5 million to help support its Violence Reduction Units, which aim to help tackle the causes of violent crime and carry out preventative work with children and young adults.

“Violence Reduction Units play a vital role in preventing young people from being dragged into the horrors of serious violence, and this funding will enable them to continue this crucial work,” Home Secretary Priti Patel said in a statement.

“I will continue to back our police with the resources and powers they need to cut crime and make your community safer.”