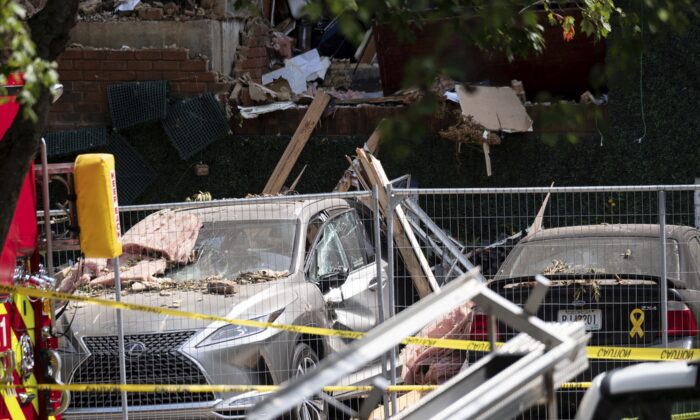 Damaged cars sit in front of an apartment building, following an explosion in Dunwoody, Ga., on Sept. 13, 2021. (Ben Gray/AP Photo)
Crime and Incidents

DUNWOODY, Ga.—Gas has been temporarily turned off at an apartment complex in an Atlanta suburb where a building partially collapsed during a weekend explosion, sending four people to the hospital.

Atlanta Gas Light said inspectors have identified appliance and fuel line issues within the buildings. Officials said they have been directed by the Dunwoody City Code Officer to suspend all-natural gas service to the entire complex until all units are inspected and deemed safe.

The company told WSB-TV that one of its crews was headed to the complex, in response to a call from someone who reported smelling gas, when the explosion occurred.

“Atlanta Gas Light is committed to delivering safe and reliable natural gas service to our customers,” it said. “Upon arrival, we began coordinating with first responders, turning off the natural gas connected to the impacted units and performing safety checks. At this time, we have not identified any other calls to Atlanta Gas Light related to odor of gas complaints at the impacted locations.”

Four people were taken to a hospital after Sunday’s explosion at Arrive Perimeter apartments and at least 25 units were damaged, news outlets reported.

Officials with the City of Dunwoody said Monday that on-site inspections revealed two gas leaks in a building at the complex that weren’t related to the explosion. Gas was shut off so those repairs could be made and crews could inspect additional buildings.

Police said they were called to the apartments in DeKalb County around 1:24 p.m. Sunday local time, where they encountered heavy gas fumes. Police began evacuating residents but then there was an explosion. The blast was so powerful that it damaged surrounding buildings.

One resident told WSB-TV that the smell of gas has become almost a regular occurrence at the complex.

“This has been an ongoing issue,” Erik Wiley said. “A lot of residents have been complaining about smelling gas.”

Wiley said he called SCANA Energy a few months ago about the smell. SCANA confirms they dispatched crews from Atlanta Gas Light on March 29.

“They did detect gas and they were going to notify management,” Wiley said.

But SCANA said there were no signs of a gas leak. And, Atlanta Gas Light said that other than Sunday, they have not confirmed any calls received from property management or from SCANA.