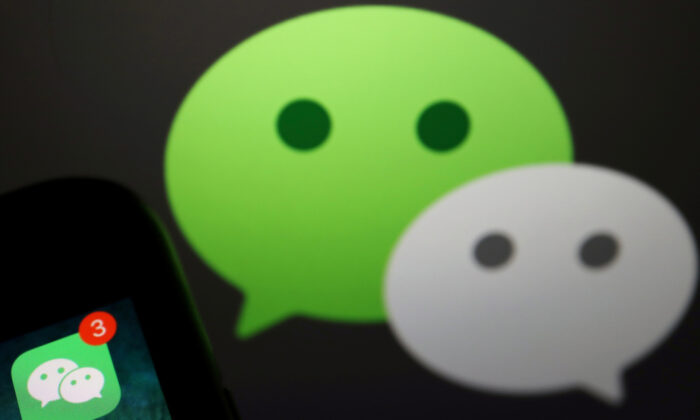 The messenger app WeChat is seen next to its logo in this illustration picture taken on Aug. 7, 2020. (Florence Lo/Reuters)
Australia

On Sept. 30, 2020, WeChat made a written submission to the Australian Parliamentary Select Committee on Foreign Interference through Social Media, claiming that user data was protected on the basis that much of its technical architecture was located in Hong Kong.

However, the takeover of the city in mid-2020 by the Chinese Communist Party (CCP) undermined any legal protection that the global city offered WeChat’s international users.

“This erosion of legal autonomy is important because WeChat has structured its operational architecture, terms of service and company structure on the consensus that Hong Kong is a more compatible legal jurisdiction to the international community,” the report said.

The Chinese-owned WeChat is one of the world’s largest mobile messaging apps, with approximately one billion active users. The app has a focus on Chinese-speaking communities and has evolved—particularly in China—into a multifaceted platform that offers payment services, video gaming, ordering at restaurants, and even shopping online.

In one instance, former Australian Prime Minister Scott Morrison’s WeChat account was taken over and “sold” to a Chinese businessperson who wanted access to the leader’s 76,000 followers.

Morrison had supported initiatives to push back against Beijing’s creeping foreign interference, including banning Huawei from Australia’s 5G network in 2018 and being one of the first world leaders to call for a global inquiry into the origins of COVID-19.

Researchers at Internet 2.0 said all WeChat user data logged by the app was stored in Hong Kong and that the passing of Beijing’s National Security Legislation—which effectively undermined Hong Kong’s autonomy—has blurred the lines between mainland China and Hong Kong servers.

“We ascertained that WeChat users can interact directly with servers on mainland China and we consider that it is becoming quite difficult to manage the competing jurisdictional priorities of a software platform that connects mainland China under the CCP and international data privacy laws such as General Data Protection Regulation in the European Union and the California Consumer Privacy Act in California.”