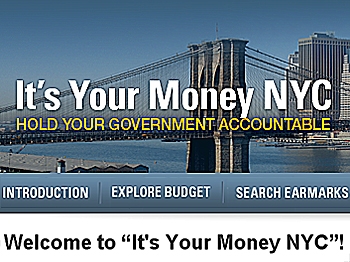 ItsYourMoneyNYC.com is the first searchable database that allows users to track city program-level spending, to view descriptions of funded services, and to find council earmarks by keyword, borough, funding recipient, agency, dollar amount and council member. The website also enables taxpayers to enter feedback for each program, thereby providing a public forum for judging the effectiveness of city-funded programs.

"I have proposed that city government put the entire city budget online in an easy-to-use, searchable, and fully transparent form, but I'm not going to wait for that to happen," said Council Member Yassky. "City taxpayers deserve to know where their hard-earned money is being spent, and the results city government is producing with those dollars. This easy-to-use site will allow average New Yorkers to select many of the city's agencies and explore their budgets broken down into easy, understandable units," he continued.

Council Member Yassky also announced the Yassky Plan for City Budget Reform, which proposes to reschedule the budget calendar to earlier in the spring in order to facilitate greater council oversight. The plan also calls for allowing city council committees to oversee their specified areas of the budget by having the Independent Budget Office divide up total allocations into Units of Appropriation, which would create a hearing and voting process similar the one used for the federal budget.