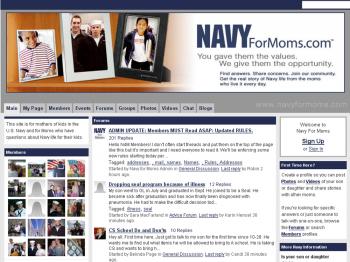 Joshua Philipp
Joshua Philipp is an award-winning investigative reporter with The Epoch Times and host of EpochTV's "Crossroads" program. He is a recognized expert on unrestricted warfare, asymmetrical hybrid warfare, subversion, and historical perspectives on today’s issues. His 10-plus years of research and investigations on the Chinese Communist Party, subversion, and related topics give him unique insight into the global threat and political landscape.
View profile
Follow
biggersmaller
Print
NEW YORK—A new social networking website is giving military families a way of getting information that has been long due.

Scrolling through the website, Sue Schouten played a video of Navy recruits playing on a submarine in the middle of the ocean, jumping off its top and sliding down its side. With another click of the mouse, she moved to show posts of other moms with kids in the military asking for hard-to-find advice.

Schouten, is one of numerous military moms who have found a social niche on the new networking website, NAVYforMoms.com. The site, which functions similar to MySpace, allows friends and family of recruits to share information, photos, videos, as well as personal experiences of what to expect when a child joins the Navy. She and other military moms met with press on Nov. 10 at Ristorante’ Domenico in Manhattan to spread word about the new site.

Schouten’s oldest son, Joe is a computer network defense expert in the U.S. Navy. She shared that, like many moms, she felt left in the dark when her son first joined the military, not knowing when she would hear from her son, what was still in store for him, or when she’d see him again. “When your son or daughter goes into the Navy or any other branch of the military, very often, there’s a lot of questions that moms will have,” said Schouten. “This is a place where you can go to get really quick responses to your questions.”

A self-proclaimed “NavyforMoms addict,” Schouten said that the first thing she does each morning is sit with a cup of coffee as she scrolls through the website in search of someone she can help. “If there’s a new mom out there who has questions about boot camp, if there’s a mom out there with questions regarding life on the Navy base, I’ll reach out to them and help them so that they won’t have to struggle like I did,” said Schouten.

Julissa Valdez shared that her oldest daughter, Moet, had joined the Navy in August. Sitting with her younger daughter, Cherokee, Valdez said that it was difficult for her when Moet had first enlisted. “From the start, we take our children and drop them off at the airport. We leave them there and we’re totally clueless of what’s going on and what’s the next step,” said Valdez.

She shared that in the beginning, the only assurance the only assurance mothers get in the first few weeks received within the first few weeks is a sentence-long phone call, letting them know that their child has arrived at boot camp. “From there, it’s like, we’re crying, we don’t know when the next phone call is, we may get a phone call in two weeks, maybe three weeks. We don’t really know. Having the website is really great because it tells you that this is normal, that it’s okay to happen,” said Valdez.

The site claims over 7,700 members and is becoming standard issue to family members when a son, daughter, or significant other joins the Navy. Lee Buchschacher, from the U.S. Navy recruiting command, commented on how the website has helped families find feel more at ease. “It’s a website for mothers of prospective sailors and also of sailors. It’s totally run by the moms,” said Buchschacher. “It’s support, emotional support from other mothers who have been through it.”