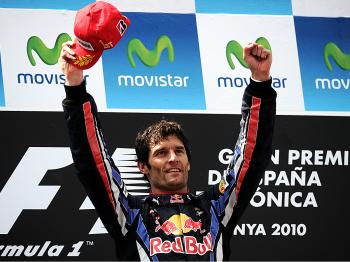 By James Fish
Print
After out-pacing the competition by a second in qualifying, Red Bull drivers Mark Webber and Sebastian Vettel were expected to win the Formula One Grand Prix of Spain in a runaway. Mark Webber performed as expected, winning the race by 24 seconds over the second-place Ferrari of Fernando Alonso. Webber embarrassed the rest of the field, proving that, when it is out front and when it doesn’t break the Red Bull is by far the best design in Formula One.

Webber summed it up simply in the postrace press conference, “It was my day today. I was very happy and satisfied that I started on the pole and could control the race.”

Vettel finished third, held up by the sort of the mechanical problems that have plagued Red Bull all season. Michael Schumacher, apparently well suited by the new long-wheelbase Mercedes, scored his best finish of the season with a fourth.

The Grand Prix of Spain was the first of the European races, and the first race when teams had a chance to make major alterations to their cars.

Ferrari added a duct to stall the rear wing for greater top speed, a la McLaren. Mercedes introduced a new longer-wheelbase version of their chassis, designed to understeer less, and thus better suit the driving styles of both Michael Schumacher and Nico Rosberg.

Schumacher made the most of the new car, demonstrating to everyone the proper technique for defensive driving. After forcefully passing Jenson Button at pit exit on lap 16, Schumacher kept his slower Mercedes ahead of the world champion’s McLaren for the rest of the race.

The McLaren was significantly faster down the straight, but the Mercedes was slightly more responsive (or better driven) through the tighter parts of the circuit. Schumacher made the most of every inch gained in the corners, and made sure that Button never had a clean shot at the corner at the end of the straight.

Though he finished a minute behind the leaders, Schumacher certainly earned his fourth-place finish.

Despite the lack of close competition up front, the end of the race had its share of tension. Vettel had to nurse his car home for the last 25 laps with his left front brake about to explode, using the gearbox to slow the car.

Apparently his adjustable front wing seized in the full vertical position, blocking the left front brake duct, causing dangerous overheating. Despite this, Vettel managed to keep ahead of Schumacher to finish fourth.

Vettel ran off the track on lap 54, and pitted for fresh rubber, giving up his podium position. Fate rewarded him for his difficult drive, however.

Louis Hamilton, who seemed on his way to an easy second-place finish, had his left front wheel fail two laps from the end, ending the McLaren driver’s day.

Apparently some debris lodged between the brake and the rim, wearing it away. The mishap gave Vettel his spot back on the podium and hurt McLaren in Constructors’ points.

Vettel was glad for his team but anguished about his own result, in the post-race press conference.

“I don’t know how to feel. Third is not a bad position, but I think we had a horrible, quite bad race, with a lot of things happening we didn’t want to. It is good to take some points but we need to work and keep pushing.

“The car is fast but you have to be able to use that every single time. It is 50-50 per cent chance of getting through.”

The race had its bit of humor, too. After Felipe Massa broke his Ferrari’s left front wing while trying to pass a lapped car, Massa's pace seemed to pick up.

Monaco is next on the schedule, a track where passing is almost impossible, and qualifying means everything. The easy pick is one of the Red Bulls; the cars are made for qualifying. If they last the race, they should win.

Second and third could belong to either Hamilton or Alonso. Both the McLaren and the Ferrari are fast, and both drivers have shown the desire to achieve.

Button’s careful driving style might not help at Monaco, where most passes are of the bravura-bordering-on-insanity variety. And Felipe Massa simply hasn’t shown the speed this year.

The new Mercedes is a definite improvement, but was never near the pace of the top teams, despite inspired driving. Schumacher and Rosberg will probably be the best of the rest.

The Formula One Grand Prix of Monaco will start at 8 a.m. EDT on Sunday, may 16. The race will be broadcast on SPEED-TV.