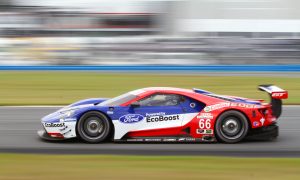 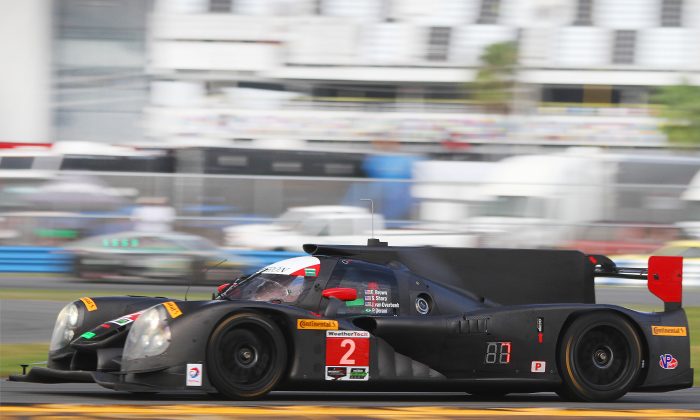 The #2 ESM Ligier-Honda streaks past the grandstands at Daytona International Speedway during the Sunday morning session of the IMSA WeatherTech Roar Before the 24. The car set the fastest time of the weekend in the Sunday Afternoon session. (Chris Jasurek/Epoch Times)
Motorsports

WeatherTech Roar Before the 24: Most Varied and Most Competitive Field Ever

DAYTONA BEACH, Fla.—The IMSA WeatherTech SportsCar Championship Roar Before the 24 has come to an end. After seven sessions of high-speed testing around the Daytona Speedway banking and through its twisting infield loops, success by some of the usual suspects was balanced by some completely unexpected triumphs from teams heretofore relegated to the back of the pack.

The prototype class was dominated throughout the weekend by teams and cars which either hadn’t run up front in years, or never had before the Roar.

Mazda’s switch to gasoline power for its pair of Lola-based prototypes paid off in a big way, with both cars running in the top three or five throughout the weekend. The DeltaWing finally started to deliver on some of the promise it had presented since its introduction three years ago, leading one session and finishing in the top three in a couple others.

Scott Sharp’s Extreme Speed Motorsports, a team which has never quite found success in several seasons, several classes, and several series, might finally have arrived. The team was quick throughout the Roar, and new driver Luis Felipe Derani pushed the team’s Ligier JS P2-Honda to the fastest time of the weekend on Sunday afternoon, lapping the 3.56-mile Daytona road course in 1:39.249 at 129.130 mph.

ESM wasn’t quickest by much. In combined session times, Michael Shank Racing’s similar Ligier-Honda was only 0.189 seconds off the pace. In fact, the best times of the top ten prototypes were all within one second of Derani’s time, and the fastest eight all broke 1:40.

Even more interesting is the variety of chassis and motors which captured the top spots. No longer is the WeatherTech Championship the domain of the Daytona Prototypes. Two Ligier-Hondas, two Mazdas, the BR01-Nissan, and the DeltaWing all outperformed the quickest DP, the Wayne Taylor Racing Dallara-Corvette.

The DPs still have the advantage of being basically bulletproof. But never before have so many serious contenders been on pace with the DPs. In past years the Daytona Prototype teams had only to outlast one or two challengers—the odds were very much in their favor, particularly in a 24-hour race.

This year could be different. The non-DP competition has proven chassis, modern aerodynamics, and a couple seasons development in this series, the World Endurance Championship and the European Le Mans Series. The DPs were outdated before the WeatherTech Championship started in 2014, and even though they have been extensively upgraded, their big advantages—massive torque, huge power, and impressive reliability—might be overbalanced by the efficiency of the more modern cars.

Of course, the Roar is just a test. How fast the various teams can really go won’t be revealed until the green flag waves to mark start of qualifying for the Rolex 24.

Since its inception as GT2 during the days of the late American Le Mans Series, the GT Le Mans class has been heralded as the best GT racing available. This weekend’s test sessions showed that still to be the case.

Extra excitement was injected by the arrival of new machinery. Ford brought its Ford GT redux, with a twin-turbocharged EcoBoost V6 in a chassis vaguely reminiscent of both the original GT40 and the more recent Ford GT. Ferrari introduced its 488 GTE, with its new 3.9-liter twin-turbo V8. BMW replaced its controversial Z4- GTEs with the new M6, also with a twin-turbo V8.

Corvette Racing was back with its C7.Rs, and Porsche came with the latest iteration of the 911s it has been campaigning since the early ’60s.

As usual, most of the field was within a second of the fastest car in each session, but it was which car was quickest in each session which mattered. BMW managed the quickest lap in three of the seven sessions, and the best lap of the weekend at 1:45.088 at 121.955 mph. However, they set that mark in the first session on Friday.

If BMW dominated Friday, Saturday was a day for scrapping. Ferrari, BMW, and Corvette each conquered a session. Sunday was all Corvette with each car setting the best mark and running one-two in the morning session.

Porsche has always triumphed by dint of its reliability, so the fact that it didn’t top a session doesn’t mean the cars won’t be competitive. Who comes out ahead after 24 hours of racing though … that is hard to predict. Corvette Racing has numerous endurance victories; as does Porsche. The BMWs and Ferraris are brand-new cars. Who knows what might develop after a couple hundred laps around Daytona’s high-speed banking?

Of the four classes which constitute the WeatherTech SportsCar Championship, it was GT Daytona which underwent the most dramatic changes between seasons, with the rules opening up to allow GT3 machinery from a variety of manufacturers, a fact quickly demonstrated by the presence of a small fleet of Lamborghini Huracáns.

Twenty-two cars were entered for the Roar: Vipers, Huracáns, Porsche 911s, Ferrari 458s, Aston Martin Vantages, BMW M6s, and Audi R8s. Old teams, new teams—Flying Lizards were back on the grid with an Audi in Krohn green, Black Swan was out in a Porsche, Magnus Racing also switched to an Audi, While CTSCC champions Stevenson Racing brought a Pair of R8s.

The Huracáns dominated Saturday, quickest in every session and one-two in the afternoon. Porsche captured sessions One (Black Swan) and Six (AJR—also set the best time of the weekend.)

Scuderia Corsa took one for Ferrari Friday afternoon, and the #93 Riley Viper was quickest in the final round.

One would expect the prototype Challenge class to be tight; after all, everyone drives an identical Chevy-powered Oreca FLM09. So it was: the top five cars were within a second, with multiple PC champions Core Autosport quickest in three of six sessions, and Starworks, which brought two cars, being quickest in three of the seven sessions it contested. PR1-Mathieson topped the remaining session.

The added power granted to PC cars for 2016 was apparent as the PCs were generally faster than the GTs on the banking. Gone are the days when the PCs’ downforce left them stuck on the banking while the GTLMs sailed by.

This Is Only a Test …

Again, none of this means much, really. First off, the Roar is as much a test of sand-bagging skill as it is of speed. Second, the Rolex 24 is a very long race—being quick only matter in the final laps. Being steady gets the car to the final stint.

Still, taken as a whole, this is possibly the most competitive set of cars ever to take the green flag for the Rolex 24, and by far the tightest field, in all classes, to line up in this century. There are more potential winners, not long shots but solid and serious competitors, in each class than the Rolex series ever fielded, and better than the past two years of this series.

It took a couple years to get things sorted, but finally, in 2016, the IMSA WeatherTech SportsCar Championship has got its stuff in working order. The 2016 Rolex 24 at Daytona promises to be the best in a quite a while, and the 2016 season actually seems exciting.

After two years of waiting for it to work, hoping the series management would find its balance and balance its classes, after pining for the lost glories of the previous series … Finally IMSA is presenting something which looks like it could ALMS and Rolex. Fans of either of the constituent series, if they care to, can find plenty to enthuse about in IMSA’s 2016 offering.

The 2016 IMSA WeatherTech Rolex 24 at Daytona takes the green flag on Saturday, Jan.30. Tickets are available through the Daytona International Speedway website, or by calling 1-800-PITSHOP.