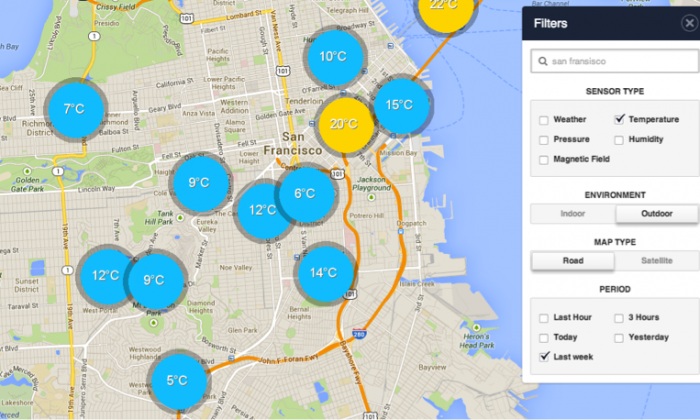 British start-up OpenSignal, which made a name for itself with its Android and iOS apps that crowdsource cell phone coverage, is now taking on the weather. The new app, WeatherSignal, uses atmospheric data gathered from various sensors, such as light meters, barometers and even battery temperature, to provide real-time pictures of the weather on a finite, hyper-local scale.

While previous attempts to crowdsource weather have relied on active participation by users, WeatherSignal is distinctive in that users don’t have to do anything. This is known in the industry as passive participation. Once the app is downloaded and the phone is on, readings are automatically sent, although users do have the option of providing more qualitative input.

New smartphones typically come standard with many of the data sensors needed to take basic atmospheric readings. For example, the most recent Samsung Galaxy phone, the S4, has a barometer, ambient thermometer, hygrometer and light meter. Galaxy may be the most advanced on the market at the moment, but most smartphones can provide valuable readings of some sort.

One question many people immediately ask is, “how is a phone supposed to accurately read the weather if its in your pocket or indoors?” There are two answers. First, the app can use sensor readings, such as the light meter, to deduce whether or not the phone is inside or outside. Secondly, with enough volume, you can obtain valid averages from aggregating all of the readings together.

This is the basic notion that lies behind the notion of Big Data. The idea is that valid insights can be drawn from a huge number of ‘noisy’ readings, rather than relying on a small number of precise observations. A noisy or ‘dirty’ reading is one that may not be accurate for a whole number of reasons. With WeatherSignal, the possibilities are endless as to why data may not be accurate at any given point. Despite this inevitable noise, though, the sheer volume of readings will yield accurate results when averaged.

It was actually this sort of data use that led to the development of the new app. OpenSignal discovered that you can indirectly measure the ambient temperature based on the temperature of a device’s battery. Developers wrote an algorithm that shows how relationship works, and collaborated with scientists at the Royal Meteorological Institute in the Netherlands to produce an academic paper. Once they realized the potential of all this atmospheric data, the next logical step with the WeatherSignal app.

“We got into this after seeing what you could do with the sensors on devices using the barometer on devices, which lets you measure humidity,” Brendan Gill, the CEO and co-founder of OpenSignal, told tech news site TechCrunch. He also says it will help the company further develop its main projects.

For the moment, there is no clear plan for how the company would monetize their new app. “We are just focused on consumer traction… we don’t have a grand monetization plan for the weather at all right now,” says Gill. OpenSignal’s more mature app, it is hoped, will provide valuable diagnostics for customers such as service providers or competitive intelligence firms.

Backed by O’Reilly AlphaTech Venture, Passion Capital and Qualcomm Ventures, the start-up is part of a fast-growing market that are aggregating crowdsourced data from the internet and mobile devices for everything from traffic conditions to public health. One recent example is Google’s Flu Trends, which uses search queries to track the spread of flu outbreaks worldwide.

OpenSignal isn’t even the first to harness Big Data for weather. The UK Met Office uses passive crowdsource methods, such as geo-located tweets mentioning snow, to track the spread of snowfall. Snow storms can be unpredictable and high-impact. The immediate and granular data that these methods offer allows authorities to better manage emergency responses to inclement weather.