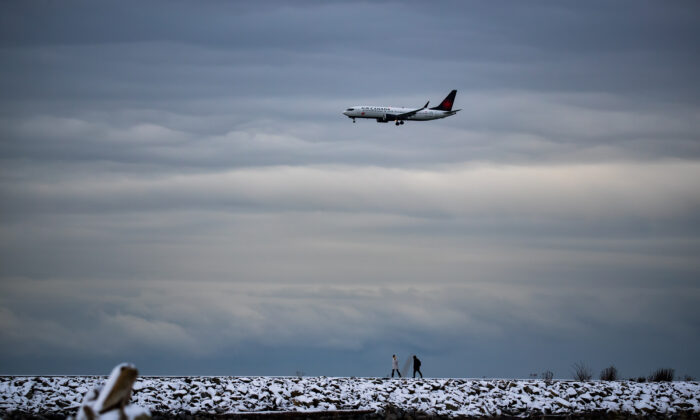 Weather, Not Omicron, Taking the Biggest Bite out of Canadian Airline Schedules

CALGARY—Canadian air travelers are experiencing an uptick in flight cancellations this holiday season, but airlines say weather is a bigger factor than COVID-19.

According to airline data company Cirium, Canada’s largest airlines canceled hundreds of flights between Dec. 22 and Dec. 26 of this year.

Air Canada canceled four percent of its scheduled flights during the period.

The proportion of canceled flights was significantly higher than earlier in December, when the cancellation rate for major carriers hovered around one to two percent, and also higher than the same period during 2019’s pre-pandemic holiday season.

South of the border, U.S. airlines have reported canceling significant numbers of flights in the past week because of staff shortages tied to the Omicron variant. Both Delta Air Lines and United Airlines said the nationwide spike in cases this week has impacted flight crews and left carriers short-staffed.

But in Canada, airlines say weather has caused more holiday travel disruptions than COVID-19 so far this year.

“The last few days were some of our busiest since pre-pandemic, carrying nearly 50,000 guests a day on more than 500 flights at peak,” said WestJet spokeswoman Morgan Bell in an email.

“We are not seeing similar issues to our U.S. counterparts and the large majority of our posted cancellations are weather related.”

Frigid temperatures and arctic air have left most of the western provinces shivering this week with wind chills dipping down as low as -55C.

Environment Canada says all of Alberta and most of British Columbia and Saskatchewan, along with parts of Manitoba and Ontario are under extreme cold weather warnings.

“We have the crews to operate our schedule so we have not been impacted as some other carriers have been by COVID-19,” a statement from the airline said.

Porter Airlines spokesman Brad Cicero said flights have operated “generally well” over the last week. He said the limited cancellations that have occurred are due largely to weather and aircraft maintenance, though a small number have been related to “staffing.”

Flair Airlines acknowledged it has seen an uptick in sick calls from staff and crews, but said that is typically expected this time of year.

“Currently, the biggest challenge for us, and likely most airlines, is that the ups and downs of the pandemic have caused staffing issues on the ground and at the airport due to long lines and increased passengers,” said Matthew Kunz, Flair’s vice-president of business transformation and operations.

Air Transat spokesman Pierre Tessier said the company has not canceled any flights in the last few days due to staffing issues related to the rising Omicron variant, “and does not expect any cancellations at this time.”

Several Canadian airlines reported they have seen travelers cancel holiday plans because of rising case numbers, though they said they also continue to see demand for new bookings.

The federal government requires both Canadian airline employees, as well as passengers departing from Canadian airports, to be fully vaccinated against COVID-19.