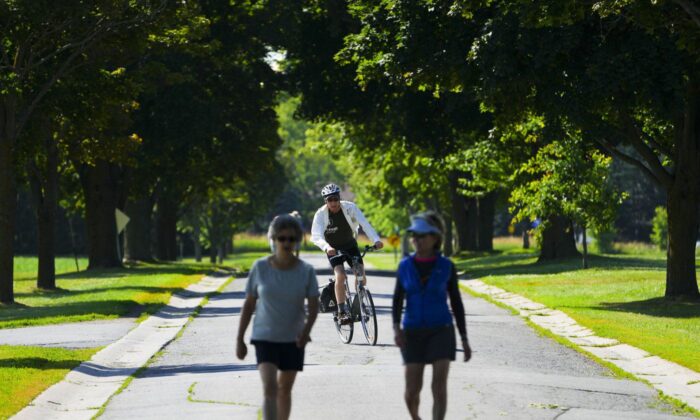 People make their way along Morningside Lane in Ottawa on July 13, 2022.(The Canadian Press/Sean Kilpatrick)
Canada

Weather Network Predicts Warmer-Than-Normal Fall Across Most of Canada

Don’t put away your summer clothing just yet; the Weather Network says there are still some warm days ahead.

The network says in its fall forecast that much of Canada can expect warmer–than-normal conditions throughout September before temperatures start to drop in October.

It says the amount of precipitation will vary across the country, though most parts will see fewer storms than usual.

The network says November is expected to bring periods of more typical weather, which will likely include some snow.

It says the warmer start to the season means a heightened risk for wildfires in British Columbia will continue later into the fall, but wetter weather is expected during October and November.

Chris Scott, chief meteorologist at the Weather Network, says much of Canada will be easing gradually into cooler weather.

“You actually have a few warm days still to look forward to,” Scott said in an interview. “We don’t have a plunge into winter anytime soon across the country.”

Scott says western Yukon is the only the part of the country that’s expected to be a little bit chillier than normal over the coming weeks.

In Atlantic Canada, residents can expect warmer–than-normal temperatures. Scott said there is a possibility of hurricanes in the second half of the fall season in some parts.

“It doesn’t mean we are going to get hit with a hurricane, it just means that this season has a slightly higher chance than normal of seeing something that could be a more serious storm,” he said.

Quebec is also expected to get warmer temperatures, but the amount of precipitation may vary, with southern, eastern and northern parts predicted to receive above-normal rainfall, and the west and central regions expected to get below-normal amounts.

In Ontario, the Weather Network is predicting above-normal temperatures, with more typical late-fall weather expected to arrive in November. Precipitation will be below normal across northern Ontario and many areas in the south, including Toronto.

“We have got some up and down weather to come, but when it goes up, it is going to get really warm,” Scott said.

In British Columbia, the temperature is expected to be warmer in September, but that’s expected to go down to near-normal in October and November.

The network is not predicting a repeat of catastrophic flooding that hit the province last November. This year, lower-than-normal precipitation is expected in September, with a much “wetter and stormier” pattern expected to develop through the mid and late fall, Scott said.