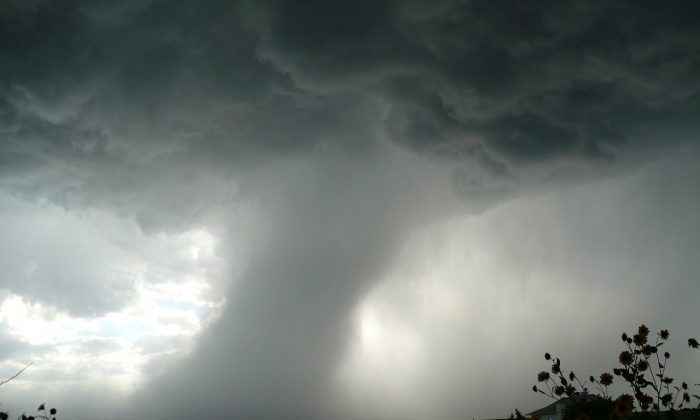 A tornado touches down in this file photo. The family of Corbin Lee Jaeger filed a lawsuit against The Weather Channel over a deadly car crash on March 28, 2017, when two TWC employees allegedly crashed into Jaeger's vehicle, killing him.
Crime and Incidents

The family of a Texas man has filed a $125 million lawsuit against the Weather Channel (TWC) over a deadly car crash in 2017, where two TWC employees ran a stop sign and crashed into another vehicle.

Corbin Lee Jaeger was killed in the two-vehicle collision outside of Spur, Texas, when two TWC employees, Randall Yarnall and Kelley Gene Williamson, ran a stop sign at 70 miles per hour while racing toward a tornado on March 28, 2017. Jaeger was pronounced dead at the scene by first responders and Dickens County Coroner.

Karen Di Piazza, Jaeger’s mother, filed the lawsuit against TWC for the wrongful death of her son, saying TWC was negligent, grossly negligent, and/or acted with malice. Jaeger, himself a storm chaser, worked as a storm spotter for the National Weather Service.

The suit alleges that Yarnall and Williamson, both of whom also died in the crash, were working within the scope of their employment with TWC and their vehicle was being operated as a mobile broadcasting studio to film severe weather and collect footage for “Storm Wranglers, Season 2” when it ran the stop sign. The show starred Yarnall and Williamson as they chased storms—including tornadoes—across the United States.

The lawsuit claims the network ignored their storm chasers’ history of reckless driving when storm-chasing and when filming TWC programming, a behavior the suit says was well known among other storm chasers and TWC, which ultimately led to Jaeger’s death.

Yarnall and Williamson were racing northbound at 70 miles per hour toward a tornado when they ran the stop sign and struck the Jeep driven by Jaeger, who was driving westbound away from the tornado. The U.S. Storm Prediction Centre shows that a tornado did touch down in the area that day.

The two storm chasers were filming the severe weather and live-streaming the footage to Williamson’s Facebook account and Youtube channel, which can be seen below. Due to lag, the video freezes at the moment when the two approach the stop sign, immediately prior to the collision.

In the video, the two men can be heard speaking to other TWC employees. The suit alleges that the video shows the fatal traffic violation was at least the fourth time the duo had failed to stop at a stop sign that day, something nobody from TWC comments on during the video. In other videos, TWC employees and representatives would monitor what the two did, and at times direct them about things like camera adjustments.

The suit also says videos of Williamson and Yarnall chasing storms frequently show that they disregarded traffic safety laws and drove aggressively. Williamson, who directed Yarnall’s driving, is often heard in the videos saying “clear,” informing Yarnall that he can ignore a stop signal. Other videos show Yarnall taking calls or even filming with his cellphone while driving. The suit alleges that TWC was aware of the two mens’ inexperience as storm chasers.

The suit says TWC was aware of that history of reckless driving because they had witnessed the pair’s dangerous driving during live video feeds of their storm chasing, which was broadcast to TWC’s studio. They had also been warned by other storm chasers on other occasions that Yarnall and Williamson’s driving put people at risk.

“We are saddened by the loss of Corbin Jaeger, Kelley Williamson, and Randy Yarnall. They were beloved members of the weather community and our deepest sympathies go out to the families and loved ones of all involved. We cannot comment on pending litigation,” a representative of TWC said in a statement to Everything Lubbock.