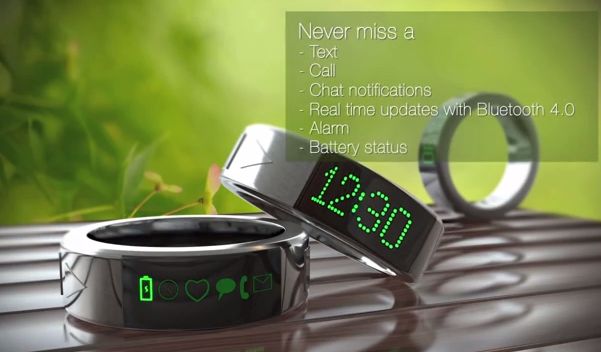 Smarty Ring would eliminate the familiar and frequent motion of pulling your phone out of your pocket or purse at every alert. All it takes is a glance at your finger.

The ring connects to smartphones; its LED screen displays time, caller names, text and email alerts, as well as Twitter, Facebook, Skype, and Google Hangout updates. You can reject a call without pulling out your phone, control music tracks playing on your phone, and more. It could also prevent you from losing your phone, as the ring will alert you if you’ve moved more than 30 feet away from the phone.

The NFC ring can unlock your smartphone or tablet when you slide your hand under the device. It can be used to transfer data, pictures, links, and more to your friends’ smartphones. It can start apps with custom parameters, and it can even unlock the door to your house, if you install a compatible lock.

“The NFC Ring never needs charging, ever,” reads the website.