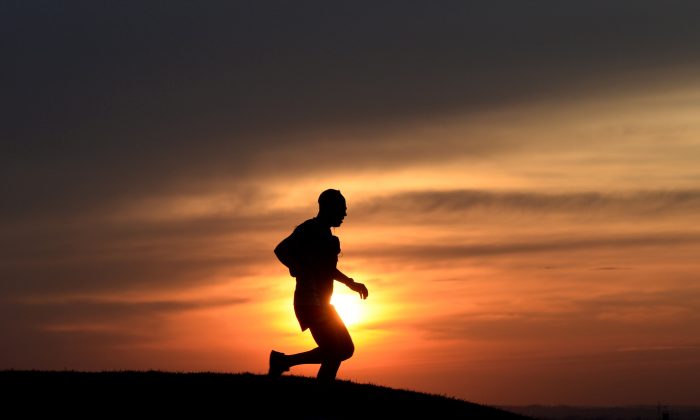 A jogger runs during the sunset after a warm spring day on March 16, 2015, in the Olympic park in Munich, southern Germany. Meteorologists forecast temperatures around 15 degrees and further sun in the region. AFP PHOTO/CHRISTOF STACHE (Photo credit should read CHRISTOF STACHE/AFP/Getty Images)
Tech

Sometime in March of this year, Jeannine Risley flew from Florida to Lancaster, Pennsylvania, staying overnight in her boss’s guest bedroom.

In the morning, she filed a police report, claiming that an unknown man had broken into her boss’s home and raped her at knifepoint.

During the investigation, the police found her Fitbit — a “wearable” fitness device that, strapped to your wrist, tracks your movements, heartbeat, quality of sleep, and other physical metrics — which, once examined, told a different story.

The Fitbit data indicated that Risley was not asleep as she had claimed, but was instead awake and walking around the house. This, along with her boss disclosing that she had been removed from her position as temporary director earlier that same week, and the lack of footprints around the snow-encircled house, led the police to believe that Risley made up the attack.

In June, Risley was charged with filing a false police report and tampering with evidence by moving the furniture around her boss’ home and placing a knife to stage her alleged rape, reported ABC27.

The Forensics of Things

Along with wearable devices, the emergence of the Internet of Things — household objects that record and transfer data to a larger network — promises to usher in a new era of forensic science, where the data from gadgets and wearables could be the decisive “witness” in civil and criminal trials.

Smart TVs, for example, could theoretically provide an alibi for a man accused of murder, according to Rob Holmes, CEO of IPCybercrime, an investigative firm that specializes in tracking down cyber-criminals.

As with other types of evidence, data from wearable devices like Fitbit will have to meet certain criteria before it could be admitted as evidence in a court of law.

“With tech, every new device adds one more convenience, and one more complication,” Holmes says.

In court, once the data is presented, the prosecution (or the defense) will still have to prove that the person in question was actually using the device at the time, which could be a towering challenge in itself.

In one of his investigations, Holmes interviewed members of five families whose IPs were all linked to an illegally-shared file; in the end, it turned out that a mutual dog-sitter had been the one illegally sharing the files.

Even if a wearable device presents informative data, it could be ruled inadmissible in court for a number of procedural reasons, particularly since the field is still so new.

For instance, in some state, scientific evidence must meet the “Frye standard” which says that a scientific technique is only admissible if the technique is generally accepted as reliable in the relevant scientific community.

“The thing to remember is that the evidence rules and traditional court procedure heavily favors eye-witness testimony over data. This goes back to the English common law tradition,” wrote attorney Jesse Woo via email. The Jesse Woo Law firm in the San Francisco Bay Area specializes in law surrounding emerging technologies.

”A judge might rule that FitBit data is misleading to a jury, or that there was no way to authenticate it properly,” says Woo.

Earlier this year, Woo’s cousin was flying a drone above his orchard when his neighbor, armed with a shotgun, obliterated it in mid-air. Woo helped his cousin sue, arguing that the drone was flying above his cousin’s property, not his neighbor’s, and therefore did not constitute trespassing.

Woo’s cousin eventually won $850 in small-claims court, but was not allowed to use the GPS data on the drone, which showed that the drone was in fact not above his neighbor’s property, in the dispute. The judge said that the data “would probably not be admissible in court, let alone small claims court.”

A Tool for Criminals?

The potential of the Internet of Things to convict the guilty and exonerate the innocent in the judicial system provides an equal, if not greater, opportunity for criminals to fabricate false alibis and slip through the fingers of investigators.

“If I were a criminal, I’d use these devices to create an alibi for myself,” Holmes said. “The smarter the criminal, they more they’ll use it as alibis, it’d be so easy for me to stick my Fitbit in my kid’s backpack for the day [and then go somewhere else.] … I would have so much fun sending bad investigators on wild goose chases.”