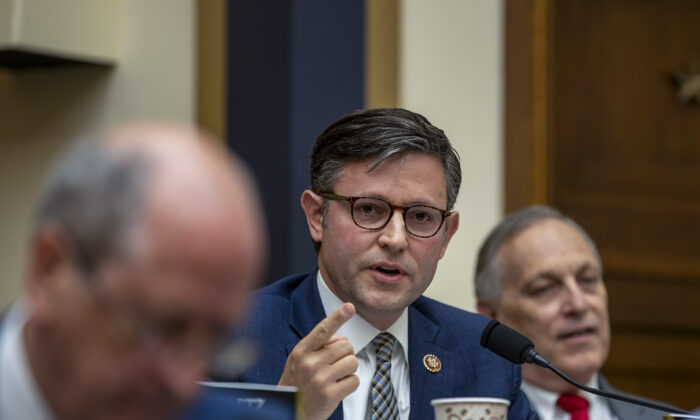 Rep. Mike Johnson (R-La.) speaks during a hearing of the House Judiciary Committee on Capitol Hill in Washington, on July 14, 2022. (Tasos Katopodis/Getty Images)
US News

But in Johnson’s eyes, the issue is bigger than Trump, Mar-a-Lago, and politics in Washington.

A “weaponized” Department of Justice (DOJ) under the Biden administration today, Johnson said in an interview with The Epoch Times, is attacking the foundational “pillars” upon which the greatest Constitutional Republic was built and undermining American citizens’ faith in the nation’s institutions.

By design, the American justice system “is a bulwark against tyranny,” Johnson said during an interview at an America First Policy Institute (AFPI) event in July.

“But if the Department of Justice, for example, is weaponized for political purposes—which is what we’re seeing right now in the Biden ministration—that jeopardizes that foundational pillar itself,” Johnson said.

As a part of the House Judiciary Committee, which provides oversight over the DOJ, Johnson censured several episodes of the said weaponization of federal institutions and procedures; including the attempted impeachment of former president Donald Trump in 2019, the DOJ’s alleged long-arm targeting of parents protesting against progressive Critical Race Theory at school board meetings, and the Jan. 6 hearings that he called the “third impeachment of Donald Trump” in a June interview with Newsmax.

“What’s happened is the legislative branch has had its constitutional authority usurped by the other branches,” Johnson told The Epoch Times.

“You’ve had activist judges for decades that had been advancing public policy from the bench. You’ve had an executive branch that is willingly taking the power away from Congress, because some members, I suppose, didn’t want to take tough votes on tough issues,” Johnson said.

Richard Reinsch, a conservative scholar at the Heritage Foundation, echoed Johnson’s observation in a May 11 commentary.

Rulemaking today, Reinsch wrote, takes place in “the regulatory or administrative state,” whereby the judges, who preside over litigation between the government and private actors, are themselves part of the establishment agency “whose rules are in dispute.”

“Legislation, enforcement, and adjudication are exercised by the same set of hands. Publius called this tyranny, and one of the objectives of the 1787 Constitution was to eliminate it,” Reinsch wrote, citing founding father Alexander Hamilton’s pen name, Publius, from the Federalist Papers.

According to Johnson, overshadowing the executive overreach—the DOJ’s weaponization as an example of this—are “two different philosophies” in “a battle of worldviews.” He added that Democrats “have a very different vision for the country” than those who believe in America’s founding principles.

“[Democrats] have disdain for the founding principles that we all believe in, and they’re trying to trade it for something else: a European-style socialist … utopian dream, which is folly of course,” Johnson told attendees of the AFPI conference.

“One of the responsibilities we have in Congress is oversight—in the next Congress as well—and we have to work on first, de-politicizing the Department of Justice. It’s been completely weaponized under this administration,” the lawmaker said.

According to Johnson, the Supreme Court today has started to recognize the importance of limiting the power of government agencies, which he said is a “very important” trend that is moving America closer to the “original design of the republic.”

“You’re seeing a United States Supreme Court that is beginning to recognize … that bureaucracies and regulatory agencies can exceed their authority,” Johnson said, citing the highest court’s West Virginia v. EPA ruling in June as an example of this recognition and adding that he is “grateful” for the conservative majority on the Supreme Court.

In the West Virginia ruling, the Supreme Court found that when an agency, such as the Environmental Protection Agency (EPA), “claims the power to regulate vast swaths of American life, it not only risks intruding on Congress’s power, it also risks intruding on powers reserved to the States,” as Justice Neil Gorsuch wrote in his concurring opinion (pdf).

The Supreme Court found that “[p]ermitting Congress to divest its legislative power to the Executive Branch,” such as the EPA’s proposed action of imposing emission standards on the states, would compromise the framers’ design of passing legislation requires a “broad consensus” among states, thereby ensuring “that any new laws would enjoy wide social acceptance, profit from input by an array of different perspectives during their consideration.”

“In a world like that, agencies could churn out new laws more or less at whim. Intrusions on liberty would not be difficult and rare, but easy and profuse,” Gorsuch said.

Jenna Ellis, constitutional attorney and a former senior counsel to former U.S. President Donald Trump, pointed to how the Supreme Court showed a similar way of thinking in disseminating policymaking power to the states with the recent ruling of Dobbs v. Jackson Women’s Health Organization, which overturned Roe v. Wade, the 1973 decision that legalized abortion in the United States.

Ellis said that the court’s findings in Dobbs are consistent with the original intent of the founders because it is “fundamentally American” for states and the American people—not any federal or judicial bodies—to regulate abortion.

“Having the states regulate abortion is absolutely consistent with originalism and with the principles of limited and separate powers,” Ellis told The Epoch Times in an interview in June. “[Congress] is limited in what they can legislate on, pursuant to Article I, Section 8 … the Ninth and Tenth Amendments go hand in hand with that, saying all powers not specifically given to the federal government are reserved to the states or to the people.”

A part of this growing trend of limiting federal agency power, Johnson said, is the return of law enforcement from federal levels to the local and state levels, which he believes is a “very important trend” that is taking America closer to the founding principles that make it “the greatest nation in the world.”

“We’re getting back to—I hope and believe—the original design of the Republic, which served us very well, for the first century and a half of our history. And part of that is the law enforcement and the prosecutorial function being pushed down to the local and state level,” Johnson said.

Despite clashing chatter in the legal academia around whether the Dobbs abortion ruling means that policymaking surrounding other rights, such as the right to gay marriage, could be also handed to the states to deliberate, Johnson says he doesn’t expect the current rights given to Americans are being taken away.

“They’re using a comment—the dictum—that Justice Thomas put into his concurring opinion, and suggesting somehow that all sorts of other rights are in jeopardy right now,” Johnson said, with a caveat: “that they claim to be rights.”

Johnson is referring to Justice Clarence Thomas’s concurring opinion in Dobbs (pdf), in which Thomas called for the highest court’s Justices to “reconsider,” in future cases, “all of this Court’s substantive due process precedents,” including Griswold, Lawrence, and Obergefell, which respectively legalized birth control devices for married persons, sodomy, and same-sex marriage.

Thomas suggests in Dobbs that any Supreme Court precedent that hinges on the legal principle of “substantive due process,” including Griswold, Lawrence, and Obergefell, is “demonstrably erroneous,” and that the justices have a duty to “‘correct the error’ established in those precedents.”

But despite Thomas’s contention, Johnson said he doesn’t expect the Supreme Court to make a move on these rights anytime soon.

“We pointed out in the House Judiciary Committee just last week when we were having hearings … Jim Jordan and I went to the floor and argued against their marriage bill that was advanced last week, that this is all fearmongering. It’s misplaced,” Johnson said, referring to the Respect for Marriage Act (H.R. 8404) passed in the House on July 19. “They know that this is not happening.”

“Even Clarence Thomas himself said that he agreed with the majority opinion [from] Alito … when he said, ‘I agree abortion is different if you’re talking about another human life,’” Johnson said, referencing Thomas’s concurring opinion with Justice Samuel Alito that the Dobb’s ruling and its opinion should not be “understood to cast doubt on precedents that do not concern abortion.”

“It’s very distinct from all the other things that we might be debating an argument about,” Johnson said. “I think the Democrats are trying to use it as a wedge issue for the November elections when they know that it’s not really going to come to pass.”

Johnson called for conservatives to be “evangelists for the truth,” and tell the next generation that America’s founding principles are what makes it the “greatest nation” in the world.

The lawmaker said conservatives should go to “places where we’re not expected to go and share the simple truths that … we have these foundational principles.

“That is the reason we are the great nation. I don’t see anyone scrambling to get into China or North Korea or Russia or any other country … They’re all trying to come here. And there’s a reason for that,” Johnson said.