Chinese Embassy to Students: Prepare for 'War' During Hu's Visit to Ottawa
0 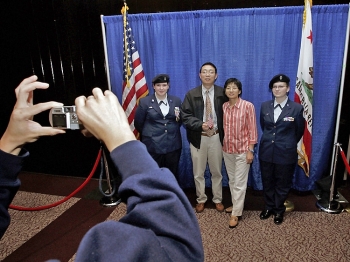 Close to 60 percent of millionaires in mainland China have either finished business emigration proceedings or are considering business emigration. In the picture, a couple have just become nationalized American citizen in San Francisco. (Justin Sullivan/Getty Images)
China

By Matthew Robertson
Print
Over half of China’s millionaires want out. An unstable political and investment environment, alongside myriad social problems, means that 60 percent of the wealthy have either completed business emigration or are making plans to move funds overseas, according to a recent report.

There are two reasons for it, opines an article in the Economic Observer, a Chinese publication: safeguarding their wealth, and salutary living conditions abroad. Countries like the United States and Canada have lower taxes, better education, clean air, a stable investment environment, and healthy food.

Meanwhile, the wealthy have a “knot in their hearts” about China, the article says. “Many rich people are in a vile environment, where if they do not do evil they cannot survive, so they have to do evil. As they continue to do evil, they fear that one day they will be caught and lose everything,” the report said.

There is also a generalized lack of confidence in China’s future, especially among those who gained their wealth legitimately, according to Li Ding, deputy editor-in-chief of Chinascope, a Chinese media analysis group.

“China is still a one-party regime, so private wealth is not really protected,” he said to New Tang Dynasty Television. “The Communist Party can take away your personal assets, your personal wealth overnight—easily. And of course there is no rule of law. The law cannot protect your personal wealth. So they are afraid.”

Getting on the wrong side of the wrong Chinese official in some cases could be enough to become a target for expropriation, Li says. “Maybe they anger some official and their wealth is gone and they can be thrown in jail. And we have seen quite a few of these kind of cases happen before.”

The capital flight bodes ill for China’s future as a productive economy, Li says. “Think about it: the rich people make money from the country, and then they move the money out of the country. So what is left in the country?”

He added: “If people are making their choice with their feet—they make money and they’re gone—then how can [China] sustain its growth? It’s impossible.”