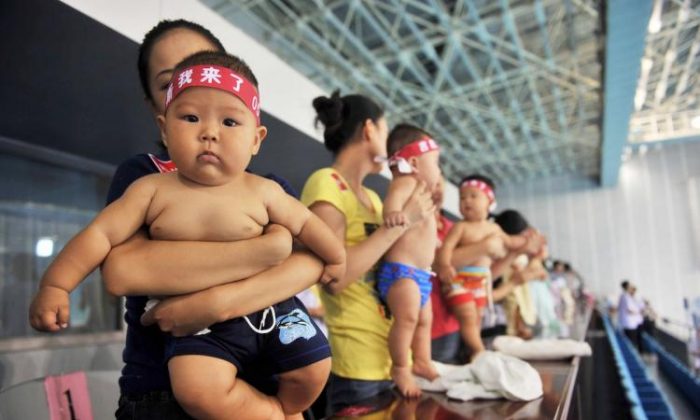 Increasing numbers of wealthy Chinese couples are hiring the services of American surrogate mothers to give birth to their babies to circumvent China's one child policy. In the photo, hundreds of Chinese babies accompanied by their parents prepare to take part in a baby swimming contest. (STR/Getty Images)
China

Wealthy Chinese couples wishing to evade the restrictions of China’s one-child policy, with fertility problems, or even to parent an American-born child, are increasingly using the services of American surrogate mothers, says a new report from All-China Women’s Federation.

When the child is born the couple take the child—a brand new American citizen—to China. These children are not forbidden by China’s restrictive one-child policy.

“We have had an average of four to five Chinese customers every month over the last couple of years,” said one agency employee to the Women’s Federation, an official organization connected to the ruling Communist Party.

Because California has established surrogacy laws, and agencies with solid reputations have been in operation in California for decades, it is a favorite destination for Chinese customers.

A full service agency will give both the husband and wife a thorough physical examination, provide detailed information about prospective surrogate mothers, and set up interviews with the women.

After the mother is chosen and contracts signed, sophisticated medical procedures begin for the couple and the surrogate mother. The procedures will produce an embryo, provide sexual selection, and implant the embryo in the mother’s womb.

The Chinese couples usually go back to China during the term of the pregnancy, and return to the U. S. when the child is born to take the new baby, who will be an American citizen, back to China.

The children are often called “American Babies” in online discussion, said the report.

In addition to surrogacy, many more Chinese women are coming to the U. S. to give birth. Though the cost may run between about $20,000 to $33,000, the fines for having more than one child in metropolitan areas like Beijing can be even greater.