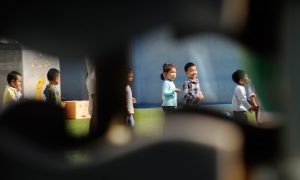 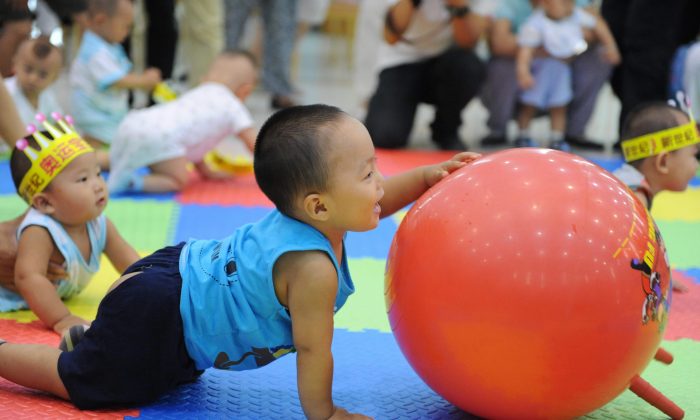 Chinese toddlers play at a Beijing nursery in 2009. Master of Business Administration preparatory classes for babies and toddlers have become popular in China among wealthy parents wanting to give their children a head start in education. (STR/AFP/Getty Images)
China

More and more privileged parents in China are sending their small children and babies to early education classes designed to prepare the youngsters for a special Master of Business Administration degree.

The fees are expensive, starting with 45-minute classes for babies under 6 months old at $300 each. One such program in Shanghai, is meant to help 3- to 6-year-old children learn about teamwork, money, negotiation, and leadership, according to Channel News Asia.

Another early education institute reported by Guangming Online offers classes for nine hours per day every weekday for $800-1,000 per month.

Many Chinese children already come under huge pressure to achieve good grades in school and attend a respected university to get a good job. A 2010 survey of high school students by the China Youth and Children Research Center found that almost 87 percent were under heavy schoolwork pressure due to their own expectations and from their parents, and also competition from classmates.

This pressure seems to be piling on at an ever earlier age, with some parents deciding to enrol their babies at less than a year old.

Ms. Zhang Feifei told Guangming Online about how she brought her 4-month-old son to one of the classes, and he soon learned to crawl, but later she realized that he would have learned to crawl without the class.

Another parent told the media: “I was once a strong believer of early education and took my child to numerous institutes. Now that I look back, if I had another child I wouldn’t do that. The best early education is for the mother to play and read with the child–to spend time with the child.”

Researcher Liu Zhanlan from the National Institute of Education Sciences thinks many such parents were born in the 1980s, and are not experienced with raising children.

“Family education is more important than class education for children between 0-3,” she told Guangming Online. “Daily activities are the best teaching materials for them.”

Netizens have also been discussing the phenomenon on China’s Twitter-like Weibo.

“As those who were born in the 1980s are beginning to have children, China will have a baby boom around 2015. The number of newborns will go up to 20 million. Of course all kinds of markets that target babies will boom too,” one netizen said.

Another wrote, “I saw an advert offering MBA classes for 3- to 6-year-olds. It totally targets the young elite moms and dads who an received MBA education–only they would believe that a 3-year-old can handle MBA courses.”