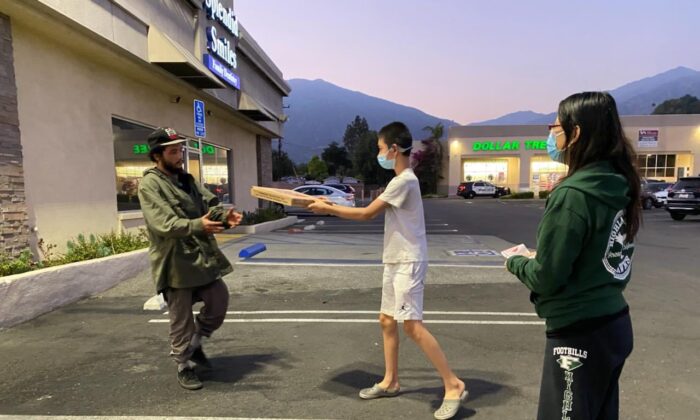 A homeless man (Left) received a pizza from a resident in Arcadia, Calif. on June 3, 2021. ( Courtesy of Michelle Wu）
Southern California

On June 1, Arcadia’s city council for the second time delayed its decision on a “tiny shelter” proposal intended to relocate the city’s homeless, as the Los Angeles suburb struggles to deal with a growing homelessness issue.

In 2015, there were 22 homeless individuals recorded living in Arcadia, 13 of whom were sheltered in transitional housing. The number remained relatively unchanged in 2016. But by 2020, the homeless population had reached 117 people—an increase of over 500 percent. Of that, 106 were counted in Incorporated Arcadia and 11 in Unincorporated Arcadia.

Arcadia’s city council voted this February to submit a letter of intent examining the use of tiny shelters at the Peck Park access road site in search of solutions for the growing homeless population.

The project is intended to be a pilot program with a minimum of 15 shelters, food, restrooms, showers, case management, security, and other services, which would serve Arcadia’s homeless population. Initial funding is expected to come from grants, and city officials have communicated that no city funds would be used for the project. Residents were assured, “If the grant money ends, we would secure emergency housing for those in the tiny shelters, then close the facility.”

At the city council meeting, nearly 200 local residents held a rally in opposition to the proposal. The residents demanded that the city council drop the plan or suspend it indefinitely. They fear these “tiny homes” will attract unhoused individuals from neighboring regions. The concern is that this would increase the city’s homeless population, lead to unsafe neighborhoods, and add to the already existing deterioration in the city’s economy. Residents expect this to have a devastating effect on property values over the long term.

Arcadia is a wealthy majority-Asian suburb about 13 miles northeast of downtown Los Angeles in the San Gabriel Valley. According to U.S. Census data, it has more than 58,000 residents, over 60 percent of whom are Asian.

Federal law does not allow prosecuting people for sleeping outside when shelter is unavailable. This puts cities in a position where they have to provide shelter for homeless individuals in order to enforce the practice of keeping homeless folks off the streets and off public property. As a remedy, Arcadia said on its website that the city council is proposing the “tiny shelters” as part of a more comprehensive approach to reducing the number of homeless people in the City. The community of tiny homes, that resemble small sheds, would serve as temporary housing for the homeless until they have permanent housing.

At the rally, local resident Joyce Lin said, “Many homeless individuals are struggling with serious mental illness and long standing drug abuse issues. What they need is proper government assistance, not the band-aid of a temporary shelter.” Lin says she’s worked in inner city Los Angeles since 2005, where she witnessed the homeless population increase exponentially. She and other residents want to avoid this from repeating in Arcadia.

Local residents fear the rapid increase in homelessness will overtake their community, resulting in similar outcomes in nearby Venice Beach. Venice Beach, an age-old tourist attraction in Los Angeles, is now inundated with over 200 tents and homeless encampments set up along the boardwalk. LAPD statistics report violent robberies have increased 117 percent and gun violence has gone up 162 percent in the area. Los Angeles residents have proposed relocating these individuals from the beachfront into housing that doesn’t obscure the scenic coastline.

Local residents have called for a study to determine the cause of the rising homelessness. At the rally, Angie Gren said she is asking the city council to investigate the root cause for the increase in the homeless population.

“We’re asking our city council to investigate other options before we approve housing for these people,” Gren told The Epoch Times. “We are asking the city to be transparent with the community with regard to the true motives of this project and with whom they are collaborating … to be transparent with us and to investigate why our homeless numbers have increased so dramatically.”

Gren further clarified: “I have never said, nor indicated, that we are opposed to helping homeless people. We feel that argument has been deliberately fashioned to pit two sides against each other. What we’re saying is we need to understand why these people are here, where they came from, and what the projection is for the future.”

Prior to Tuesday’s council meeting, Mayor Sho Tay said he still hadn’t received the report and would not be able to answer the question of what was causing the increased homelessness in Arcadia.

On May 6, over 500 local residents participated in a virtual community forum regarding the homelessness crisis in Arcadia and opposed the implementation of a homeless resource hub. On May 15 and 16, protesters lined the streets of Arcadia, urging council members to eradicate the plan. At the May 18 city council meeting, over 200 residents gathered outside shouting, “No homeless resource hubs that endanger the safety of our residents” and “We need a safe living environment, no more homeless shelters.”

More than 60 individuals used the council meeting’s open forum to address the council members and explain their opposition to the proposal. Additional residents flooded the legislators’ phone lines, far outnumbering the voices in support of the plan.

April Verlato, a city council member, believes the council needs to make an immediate decision on the homelessness issue. The more the council delays, the more public opposition will continue to grow.

Many believe that this situation is much more complicated and exceeds the legislative powers of the city council. The underlying issues of employment, alcoholism, drug abuse, and crime are beyond the scope of the local city council.

Visiting the site of homeless encampments, resident Michelle Wu said “the tents are very near the residential neighborhoods, which has saddened local residents. The neighbors and I sincerely hope that the city council listens to and responds to our voices, dropping the proposal as soon as possible.”

In the growing homelessness crisis, the council plans to create an ad hoc committee to discuss the proposal over the next 120 days.

Vivian La Farge and Anna Shea contributed to this report.