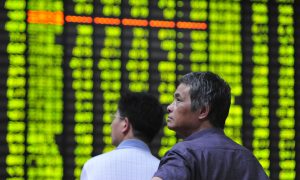 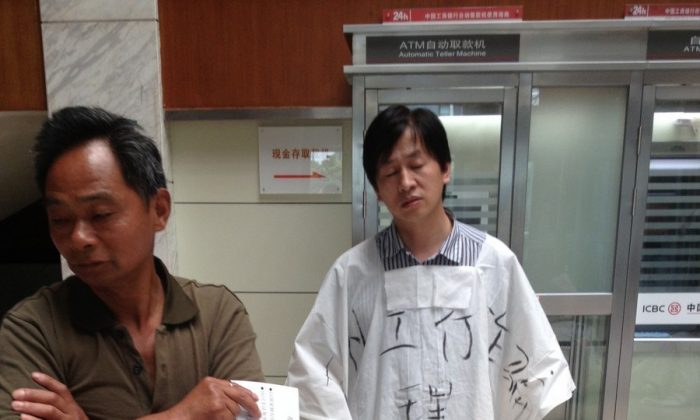 A protester stands in the lobby of a branch of the Industrial and Commercial Bank of China in the city of Suzhou, Jiangsu Province. 11 investors fear that they have lost their entire investment in a Wealth Management Product sold out of the bank. (soundofhope.org)
Business & Economy

A shady financial product offered at the branches of the largest bank in China failed recently, leaving those who had invested in it facing the loss of all their capital.

11 of the investors who bought into the product in 2011, at their wit’s end, decided to dress in all white–the color traditionally used by Chinese during funerals and in mourning–and marched to the bank’s branch in Suzhou, Jiangsu Province, with placards and flyers describing their loss and humiliation on June 26.

“The Industrial and Commercial Bank of China is a Financial Management Fraud, Customers Have Grave Losses,” one of the signs said.

“The WMP manager and the deputy-head of the bank branch told me time and again that ICBC is one of the major four Chinese banks, and that their credit is guaranteed, and the product itself is safe,” Li Yihua, one of the investors who lost her money, told Time-Weekly, a Chinese news magazine. “That’s why I bought the WMP they recommended.”

She was promised an annual rate of 12 percent, versus the negative real interest rates offered by a regular bank account.

The investment, called a wealth management product, was sold through the Industrial and Commercial Bank of China, with all the assurances of that massive state-owned bank’s brand. But when it failed, investors were told that they were on their own.

ICBC merely mediated the exchange between a trust or wealth management company and the investors–while taking a tidy slice of the interest and a fee for its trouble.

Chinese investors are told this when they buy such products, but many believe, or pretend to believe, that the bank will backstop the investments in any case. The funds are often funneled by the intermediary company into such speculative sectors as real estate, mining, and loans to local governments for infrastructure development, on the tame end.

Banks have turned to such products, which overall are called shadow banking, sometimes as a way of getting around the strict limits set by the state on what rates they can lend money at. There are countless permutations of arrangements—few of them transparent—between banks, trust companies, wealth management companies, loan guarantee companies, local governments, and other vehicles.

Li is facing a loss of 2 million yuan (US$326,000). She invested, along with 10 others, in September of 2011 for a one-year “no-risk WMP.” They found that once the time expired, however, their WMP had turned into a “trust loan,” money that they now think they’ll never see again. In the over 10 months since the redemption date last year, the 11 investors haven’t seen a cent. The total capital put into the product was 22.3 million yuan (US$3.6 million), according to Time-Weekly.

“More and more banks seem to be getting caught up in wealth management product scams,” declared the news website Tiger Finance, in an article that was posted by Economic Information, an affiliate site of regime mouthpiece Xinhua. It was later purged from that website.

Many analysts believe that wealth management products, and the shadow banking industry of which they are a part, are a hidden risk to the Chinese economy. Shadow banking arose as banks shifted loans off their balance sheets, mediated by trust and wealth management companies. WMPs are often short-term in duration and are used to fund projects with a much longer time horizon for a return on investment.

“If WMPs begin to default in large numbers, investors are unlikely to give the banks a free pass,” writes Nicholas Borst, China program manager at the Peterson Institute, an economics think tank in Washington, D.C., in a blog post. “Just as there have been protests… when stocks have lost money, the banks, and by extension the government, will find themselves under pressure if the WMP market goes south.”

Peterson estimates that the outstanding stock of WMPs is 11.5 trillion renminbi ($1.8 trillion), which it says is about 13 percent of total bank deposits. “This number is big enough to start having implications for the stability of the Chinese financial system and the trend is going in the wrong direction,” Borst writes.

The companies that offer them, and banks, often need to keep offering new products to pay back the old investors. This funding mismatch means that if there is a lack of confidence from investors who fail to buy new WMPs, previous investors may lose their capital, precipitating more defaults and demands for money, and potentially a crisis in the banking sector.

The recent collapse of the WMP offered at ICBC is unlikely to have immediate wider ramifications, according to Fraser Howie, co-author of “Red Capitalism,” a book about China’s banking system.

“In and of itself this is neither big enough nor public enough yet to sink the whole ship,” he said in a telephone interview. “This is not the Lehman Brother’s collapse that caused the systemic crisis.” But it’s indicative of more to come.

“We’re early in the cycle,” he said. “Credit has been bountiful for years, and there have been creative ways to get credit into the economy. So up until now credit hasn’t been a problem.”

The recent spike in interbank lending rates, however, shows that the central government is trying to rein in credit growth. “If they are serious about really tightening credit, then I think you’ll see more and more of these,” he said.

The new Party leadership is likely to tread carefully, however, because slowing growth and a contraction in credit could cause companies, and wealth management products like that offered through ICBC, to default.

Howie predicts that if WMPs begin defaulting on a wide scale, it will likely be the banks that are leaned on to dip into their own coffers to repay angry investors. “At some point, someone has to take the pain here.”