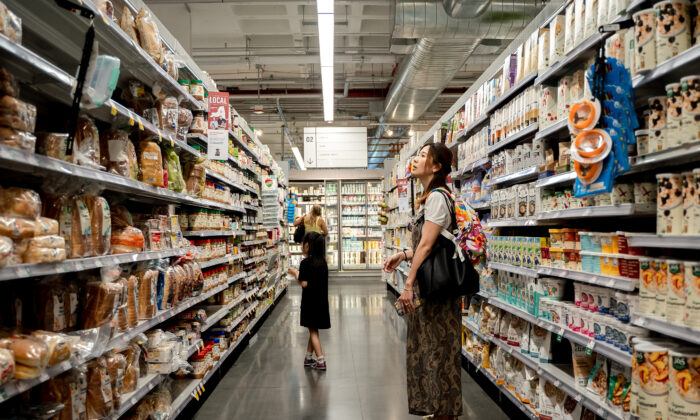 People shop at a grocery store in New York on May 31, 2022. (Samira Bouaou/The Epoch Times)
Thinking About China

U.S. consumers—the backbone of the post-pandemic recovery—are losing the wherewithal to keep up their spending. Signs were already evident in the uneven pace of spending growth during recent months.

Matters have become crystal clear in the income data reported by the Commerce Department. Households are already sacrificing savings flows just to keep up with current rates of spending, much less to expand them. The future can’t help but see spending slowdowns and likely cutbacks that will slow or halt the overall pace of economic growth.

To be sure, the top-line income figures still look good. A continuing robust pace of hiring and decent wage growth has so far this year pushed up paycheck income by 9 percent at an annual pace. That tops even the unconscionably high rates of inflation plaguing the country. Proprietors’ incomes have lagged, growing at only a 3.5 percent annual pace. Evidently, rising costs have eaten away any gains these businesses might have enjoyed from increasing prices.

Farmers have seen their incomes boom at an astronomical 373.4 percent annual rate because of the general rise in food prices and, of course, the special price boost brought on by the shortfall of Russian and Ukrainian grain shipments. Of course, this has a negligible impact on the overall income tally, as farmers are a small part of the total.

On these bases, consumer spending would seem capable of just rolling on, but this is far from the whole story. Investment income has taken a hit. The Commerce Department reports that it has grown at only a 3 percent annual rate so far this year, far behind inflation.

Despite the impulse to dismiss such a shortfall as a problem for the (undeserving) “rich,” investment income mainly concerns retirees who count on it for the necessities of life. It usually constitutes between 13 percent and 15 percent of all household income, so the shortfall here matters on both accounting and human grounds. Transfers from the government, usually between 18 percent and 20 percent of total household income, have also lagged.

To be sure, payments under Social Security, Medicare, and Medicaid continue to grow close to the pace of inflation. But dollar flows from unemployment insurance have slowed, happily because of job growth, while COVID-19 emergency payments have fallen by more than half.

And taxes have cut back a great deal on what households have for spending. With the surge in hiring and wages, payroll tax collections have increased disproportionately, rising at a 10 percent annual rate so far this year and taking quite a chunk out of how much gross income people have at their discretion. At the same time, income taxes have also increased disproportionately since this country’s progressive tax system takes at an increasing rate from each additional dollar of income.

Taking all these considerations into account, overall after-tax household income—what the Commerce Department refers to as disposable income—has grown at only a 5.8 percent annual rate so far this year. And since that pace of expansion trails the rate of inflation, real disposable income has declined at something close to a 2 percent annual rate. This isn’t the stuff of a continued consumer spending boom of the sort that has typified the economy for the past 18 months or so.

The strain is already evident: Just to sustain even the recently slowed pace of consumer spending, households have begun to sacrifice savings flows. These have fallen off precipitously. At the end of 2021, for example, households added to their savings at an annual pace of $1.5 trillion, setting aside about 8.4 percent of their total income. As of the latest data, that pace has dropped to $1.2 trillion, only 6.2 percent of income, a 67.5 annualized rate of cutback. People can’t continue in this way for long. They’ll have to slow or cut back on their rates of spending.

Anticipated cutbacks should be less draconian than experienced during the 2008–09 great recession of painful memory. But the negative direction is nonetheless clear. Spending will slow and at times decline as inflationary pressures will likely persist for some time.

Even if the economy gets lucky, avoids recession, and experiences what the financial media likes to call a “soft landing,” the impressive pace of the post-pandemic recovery to which all have grown accustomed will slow dramatically during the second half of this year and into 2023.