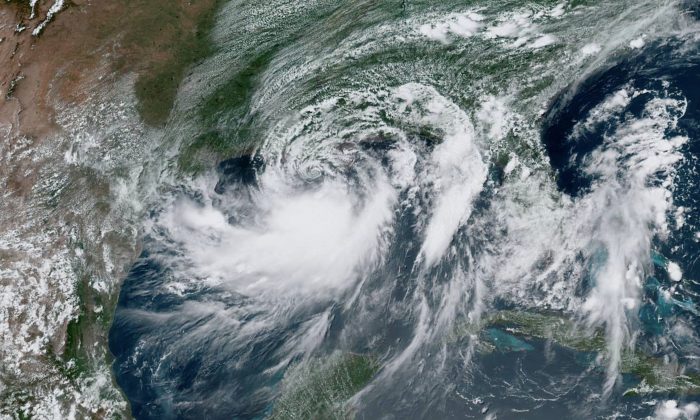 Satellite imagery of Tropical Storm Barry approaching the coast of Louisiana, U.S., from the Gulf of Mexico on July 12, 2019. (NOAA/Handout via Reuters)
US News

NEW ORLEANS—Barry rolled into the Louisiana coast Saturday, flooding highways, forcing people to scramble to rooftops and dumping heavy rain that officials had feared could test the levees and pumps that were bolstered after Hurricane Katrina devastated New Orleans in 2005.

After briefly becoming a Category 1 hurricane, the system weakened to a tropical storm as it made landfall near Intracoastal City, about 160 miles west of New Orleans, the National Hurricane Center said.

By early evening, New Orleans had been spared the worst effects, receiving only light showers and gusty winds. A National Weather Service forecaster said the city may escape with only 2 to 4 inches of rain. But officials warned that Barry could still cause disastrous flooding across a wide stretch of the Gulf Coast and drop up to 20 inches through Sunday across other parts of Louisiana.

“This is just the beginning,” Louisiana Gov. John Bel Edwards said. “It’s going to be a long several days for our state.”

The Coast Guard rescued a dozen people from flooded areas of Terrebonne Parish, south of New Orleans, some of them from rooftops, a spokeswoman said. The people included a 77-year-old man who called for help because he had about 4 feet of water in his home.

None of the main levees on the Mississippi River failed or were breached, Edwards said. But a levee in Terrebonne Parish was overtopped by water, officials said. And video showed water getting over a second levee in Plaquemines Parish, where fingers of land extend deep into the Gulf of Mexico. Terrebonne Parish ordered a new evacuation affecting an estimated 400 people.

Nearly all businesses in Morgan City, about 85 miles west of New Orleans, were shuttered with the exception of Meche’s Donuts Shop. Owner Todd Hoffpauir did a brisk business despite the pounding winds and pulsating rain.

While making doughnuts, Hoffpauir said he heard an explosion and a ripping sound and later saw that the wind had peeled off layers of the roof at an adjacent apartment complex.

In some places, residents continued to build defenses against rising water. At the edge of the town of Jean Lafitte just outside New Orleans, volunteers helped several town employees sandbag a 600-foot stretch of the two-lane state highway. The street was already lined with one-ton sandbags, and 30-pound bags were being used to strengthen them.

“I’m here for my family, trying to save their stuff,” volunteer Vinnie Tortorich said. “My cousin’s house is already under.”

In Lafayette, Willie Allen and his 11-year-old grandson, Gavin Coleman, shoveled sand into 20 green bags, joining a group of more than 20 other people doing the same thing during a break in the rain. Wearing a mud-streaked T-shirt and shorts, Allen loaded the bags onto the back of his pickup.

“Everybody is preparing,” he said. “Our biggest concern is the flood.”

Many businesses were also shut down or closed early in Baton Rouge, and winds were strong enough to rock large pickup trucks. Whitecaps were visible on the Mississippi.

Oil and gas operators evacuated hundreds of platforms and rigs in the Gulf of Mexico. Nearly 70 percent of Gulf oil production and 56 percent of gas production were turned off Saturday, according to the U.S. Bureau of Safety and Environmental Enforcement, which compiles the numbers from industry reports.

Barry developed from a disturbance in the Gulf that surprised New Orleans during the Wednesday morning rush with a sudden deluge that flooded streets, homes and businesses. For several days, officials braced for more flooding. But as sunset approached, the city saw only intermittent rain and wind, with occasional glimpses of sunshine.

During a storm update through Facebook Live, National Hurricane Center Director Ken Graham pointed to a computer screen showing a huge, swirling mess of airborne water. “That is just an amazing amount of moisture,” he said. “That is off the chart.”

Barry was moving so slowly that heavy rain was expected to continue all weekend.

Although the outlook for New Orleans had improved significantly, weather service forecaster Robert Ricks said it was too early to declare that the city was in the clear. The agency also reduced its rainfall estimates for Baton Rouge to between 6 and 10 inches through Sunday.

Forecasts showed the storm on a path toward Chicago that would swell the Mississippi River basin with water that must eventually flow south again.

For a few hours, the storm had maximum sustained winds of 75 mph, just above the 74 mph threshold to be a hurricane. Barry was expected to continue weakening and become a tropical depression on Sunday.

Governors declared emergencies in Louisiana and Mississippi, and authorities closed floodgates and raised water barriers around New Orleans. It was the first time since Katrina that all floodgates in the New Orleans area had been sealed.

Still, Edwards said he did not expect the Mississippi to spill over the levees despite water levels already running high from spring rains and melting snow upstream. The barriers range in height from about 20 to 25 feet.

Authorities told at least 10,000 people in exposed, low-lying areas along the Gulf Coast to leave, but no evacuations were ordered in New Orleans, where officials urged residents to “shelter in place.”

Despite the apparent calm in her city, New Orleans Mayor LaToya Cantrell cautioned that the storm continued to pose a threat.

“The slow pace pushed the timing of expected impacts further into today, tonight and Sunday,” Cantrell said. “This means that New Orleans residents are not out of the woods with this system.”