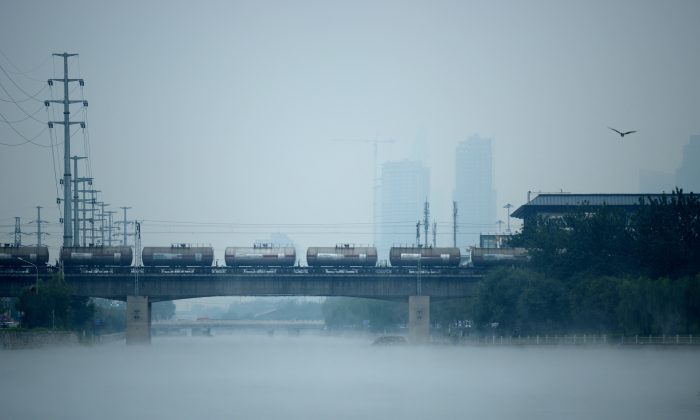 Since September of 2008 Chinese banks under the direct control of the Chinese regime pumped more than $16 trillion of credit into the economy.(WANG ZHAO/AFP/Getty Images)
Business & Economy

All of a sudden, everything is going down: Stocks, housing, commodity financing deals, economic growth. In China, debt expansion is the primary driver behind all of them; and it is going down too.

Wednesday, the Chinese central bank (PBOC) reported that banks and other financial entities only created $44.3 billion of new debt in July, the lowest since October 2008, during the dark days of the last financial crisis.

To put things in perspective, since September of 2008 Chinese banks under the direct control of the Chinese regime pumped more than $16 trillion of credit—or debt, depending on which side of the balance sheet you are looking at—into the economy.

It mostly went into housing and infrastructure projects, driving up house prices, commodities and consumer prices. It also indirectly fed into the stock market, albeit very briefly. The Shanghai composite is still down 60 percent from its 2007 highs and has moved sideways for over three years.

Maybe the stock market knows something the other sectors so far haven’t grasped, namely that most of the money went into unprofitable ventures and stock owners, after all, want to see a profit.

Finally in 2014, house prices started to roll over throughout the nation and across all tiers. Desperate to sell unwanted inventory, developers started to introduce discounts for the first time. Home sales went down 28 percent annualized in July compared to June, according to Bloomberg.

In an effort to bolster this important sector which makes up 12 percent of GDP, authorities have relaxed reserve requirements for banks and pumped extra liquidity into the banking system.


It seems, however, people aren’t taking the loans, which is reflected in the low PBOC figures for new credit in July. Relaxed standards have led to a small surge in transactions late in July but then abated quickly.

This is because housing in China has become so unaffordable people have to pay up to 14 times their average annual income in Shanghai, one of the tier one cities. Analysts call this a fundamental oversupply for high class housing.

Affordable housing is still in demand, but housing will only become affordable if prices decline, regardless of the quality. If prices decline, however, it will lead to losses for owners and developers of existing housing stocks, fire sales and bad loans for banks. Several hundreds of defaults on mortgages already occurred throughout the country, a process similar to what happened in the United States after the subprime bubble burst.

Since housing makes up such a large part of the Chinese economy, its effect on growth can already be felt. GDP growth this year is expected to come in at about 7.5 percent, the lowest in 24 years.

Fixed asset investment, which includes housing, rose 17 percent, but this is the lowest rate since 2001. Factory production also slowed and retail sales missed expectations. Only exports surprised to the upside.

What can be done? As for housing, it seems the horse is out of the barn. Unless the Chinese regime either forces citizens to buy houses or gives them the money to purchase unaffordable homes, the Chinese people will refrain from buying until their income catches up—or prices drop further.