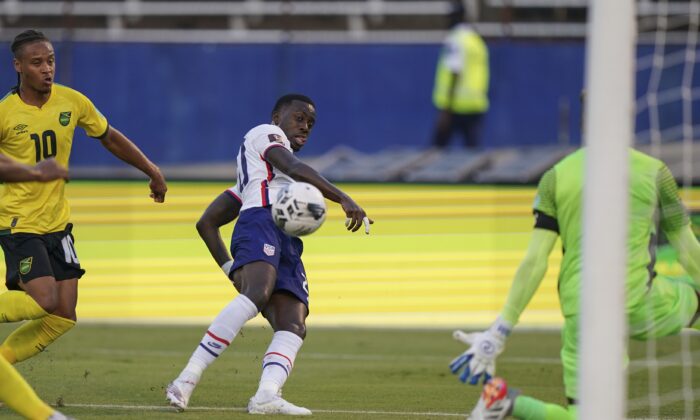 KINGSTON, Jamaica—Damion Lowe leapt above Walker Zimmerman at the top of the 6-yard box in the 84th minute and headed Leon Bailey’s corner kick to the left of U.S. goalkeeper Zack Steffen.

Back at The Office for the first time in 25 months, yellow-clad Reggae Boyz fans erupted at the apparent go-ahead goal.

Costa Rican referee Juan Gabriel Calderón whistled Lowe for a relatively slight push into Zimmerman’s shoulder, a call frequently not made against a CONCACAF home team.

“He blew the whistle early, and that was a relief,” U.S. coach Gregg Berhalter said.

The Americans started the second half of World Cup qualifying with a bumpy 1–1 draw against Jamaica on Tuesday night. Tim Weah’s 11th-minute goal on an angled 6-yard shot off his weaker left foot was offset by Michail Antonio’s spectacular 34-yard strike in the 22nd.

“We’re still in a good position,” U.S. captain Tyler Adams said. “It’s going to be super-important we continue to win our home games, get points on the road when we can.”

The United States has 15 points going into its final six qualifiers—three home games plus road matches at Canada, Mexico, and Costa Rica. Panama and Mexico had 14 each, followed by Canada (13), Costa Rica (nine), Jamaica (seven), El Salvador (six), and Honduras (three). The top three nations qualify from North and Central America and the Caribbean, and the fourth goes to a playoff.

“Any time you can get a point away from home is a good thing in CONCACAF qualifying,” Berhalter said. “For the guys to have their heads down because we wanted more is completely natural.”

On the disallowed goal, Jamaica coach Theodore Whitmore didn’t have a good view from the sideline.

“I wouldn’t complain about the officiating,” he said.

CONCACAF does not use video review in World Cup qualifiers.

“Sometimes you don’t get that call,” Zimmerman said. “But I do think it was a foul. I think he hit me before hitting the ball.”

Loud reggae played on speakers during warmups before a crowd of about 1,000 at 35,000-seat Independence Park, where a statue of Bob Marley sits outside. The scoreboard was off, and there was no visible game clock. The temperature was a comfortable 83 degrees for the 5 p.m. start.

U.S. passing was not as crisp on the rough field. The central midfield of Adams, Yunus Musah, and Gianluca Busio— subbing for suspended Weston McKennie—had 164 touches, down from 224 for the midfield trio in Friday’s 2–0 win over Mexico at the sparkling new stadium in Cincinnati, according to STATS Perform.

“It wasn’t really much of a soccer match,” Steffen said. “It was more just physicality and who could run longer and just continue to fight.”

Weah scored his second international goal after exchanging passes with Ricardo Pepi. Weah continued his run, muscled past Bobby Decordova-Reid and from an extremely tight angle slotted past goalkeeper Andre Blake, off the far post and in.

“My natural instinct is to cut in and shoot and hit it with my right foot,” Weah said. “I got the ball on my left foot and I just knew I had to take my opportunity.”

Before the game, the public address announcer introduced the 21-year-old Weah as a son of former FIFA Player of the Year George Weah—the current president of Liberia—and a mother of Jamaican descent.

With Jamaica playing on the 24th anniversary of clinching its only World Cup appearance, Antonio scored the longest-distance goal in the final round of CONCACAF qualifying.

He won the ball in midfield, took several touches and cut inside of Adams, then curled the ball with a loud thwack past the outstretched left arm of Steffen and just under the crossbar for his second international goal. Of Antonio’s 54 goals for club and country, this was the first from outside the penalty area.

“Without hesitating, he just ripped one,” Adams said. “That was one of the top ones, for sure.”

Steffen said it “was like a Jabulani ball,” criticized by goalkeepers for rocketing during the 2010 World Cup.

“I don’t think I had really had much of a chance,” Steffen said.

Chris Richards and Zimmerman started in central defense together for the first time.

A cross ricocheted off Antonee Robinson’s right shoulder in 38th but the arm was tucked in and there was no call.

Busio had the best U.S. chance of the second half, putting a long-range shot over the bar in the 52nd, and Decordova-Reid skied an open 6-yard shot a minute later. Christian Pulisic, still getting fit followed a sprained left ankle, entered in the 66th for a tiring Weah.

“We just have to stay positive, keep a positive energy in the group and just continue on back,” Weah said. “We got a point out of it. We just need to bounce back next game.”

Panama rallied for a 2–1 win over El Salvador on Tuesday night, getting goals from Cecilio Waterman and Freddy Góndola in the 52nd after Jairo Henriquez put the visitors ahead 11 seconds in. Costa Rica beat Honduras 2–1 when Gerson Torres scored in the fifth minute of second-half stoppage time. Oscar Duarte put the visiting Catrachos ahead in the 20th, and Romell Quioto tied the score in the 35th.