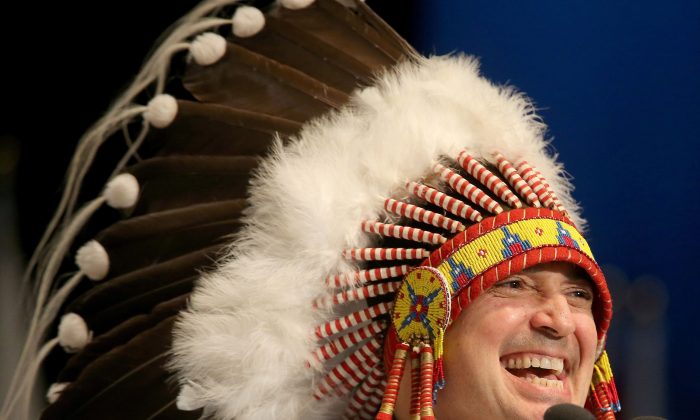 National chief Perry Bellegarde speaks after being elected on the first ballot at the Assembly of First Nations election in Winnipeg on Dec. 10, 2014. (The Canadian Press/Trevor Hagan)
Canada

‘We Will Be Making Change,’ Says New AFN Chief

WINNIPEG— Saskatchewan’s Perry Bellegarde, the new national chief of the Assembly of First Nations, says it will no longer be business as usual when it comes to development on First Nations land.

“The chiefs have spoken … We will be making a change in Canada,” he said after the result on Dec. 10.

Bellegarde ran a campaign that focused on a pledge to restore pride among First Nations and focus on self-determination. He said governments and resource companies will no longer “grow fat” off First Nations while aboriginal people live in poverty.

“Our First Nation people can rise up and have the same thing as everyone else in Canada—good housing, good quality education for our kids, jobs for our people, to make sure the land and water is respected,” he said.

Bellegarde took 63 percent of the 464 first-ballot votes cast in Winnipeg, more than the 60 percent required for victory.

The AFN’s top job came open earlier this year when former national chief Shawn Atleo resigned due to fallout from his support of a controversial federal act to reform First Nations education.