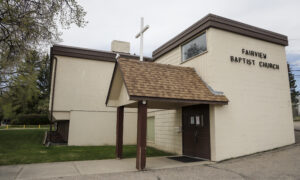 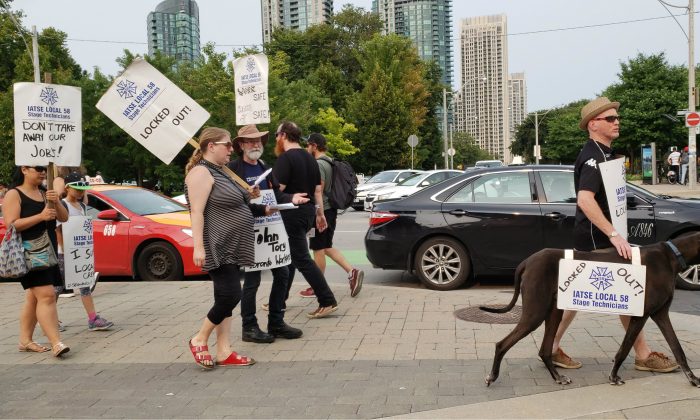 ‘We Want to Do the Work We Love’: Locked-Out Workers Picket the CNE

Holding signs that say “Locked Out” and “Work Safe, Home Safe,” workers continue to picket outside the entrance to the CNE, calling on Exhibition Place and Toronto Mayor John Tory for their jobs back.

More than 400 stagehands and technical employees with International Alliance of Theatrical Stage Employees Local 58, a union made up of stage technicians involved in Ontario’s entertainment sector going back to 1898, have been locked out of their jobs at the CNE since last month.

The Exhibition Place board of governors has dismissed contractual negotiations with the union and is replacing the workers with people from out the province, such as Quebec and Alberta.

The IATSE members say they have been without a contract since December 2017, and began picketing on Aug. 17, the opening day of the two-week fair that takes place annually on Toronto’s waterfront.

The union had proposed renegotiating the contract they had with Exhibition Place that ended in December 2017. The workers were locked out on July 20 after seven months of negotiations between the two sides. The union has since asked for a neutral, third-party arbitrator to deal with the issue but say Tory and the board have been silent.

“Our bargaining unit came back saying they wouldn’t even talk to them,” said Greg Feor, one of the stagehands on the picket line on Aug. 18. “No one is answering the phone, no one wants to get back. Their answer to us was ‘give up your job and leave.’”

Global News reported that Councillor Justin Di Ciano, vice-chair of the Exhibition Place board of governors, made the decision to keep the union away in order to make the Ex more “competitive.”

“Now, you have events that have their own specialized staff that travel … so what you have is job shadowing. You have very expensive labour standing around watching these shows set themselves up,” he said.

Board chair Mark Grimes told Global, “In order for Exhibition Place to remain sustainable, we have to end practices at are detrimental to attracting new businesses of Exhibition Place and do not reflect competitive industry practices and technology.”

That doesn’t sit well with Feor.

“We’ve had contracts since, wow, 1920, a long time, since the fairgrounds opened, and all of a sudden, boom, oh no we’re a problem. So it doesn’t seem right,” he said.

“It’s about jobs that we have that are being replaced, it’s about bringing in possibly unqualified people or people out of province replacing Toronto workers—that’s what this is that all about.”

Justin Howlett, a stagehand who specializes in audio who was also picketing on Aug. 18, noted that IATSE members are not on strike, despite what some news reports have said.

“We are not on strike—we’ve been told we are not allowed to do our jobs,” he said.

He and the other workers want to be back at the CNE doing their jobs, he said, adding that they will continue picketing until they get answers from the board and mayor.

“We are here every single day raising awareness and letting people know we are not trying to get more money, we are not out here striking, just being greedy. We want to do the work we love to do and have been doing before WWII.”