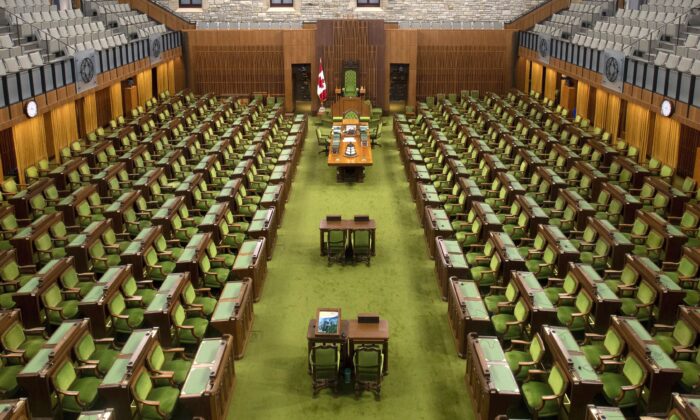 An empty House of Commons chamber in Ottawa is seen on April 8, 2020. (The Canadian Press/Adrian Wyld)
Canada

Democracy advocates say the WE Charity scandal clearly demonstrates that Canadians deserve a Parliament that sits regularly in order to hold the government to account.

Normal House of Commons sittings have been largely adjourned since mid-March as a result of the pandemic lockdown. The Commons chamber will only be occupied three more times—July 22, Aug. 12, and Aug. 26—before the fall session resumes on Sept. 21.

Meanwhile, a special COVID-19 committee has acted as a stand-in for the chamber.

“I think the fact that without Parliament and the Opposition having a forum to speak—and the media doesn’t seem to give them much attention—that it’s very damaging to a democratic system, a parliamentary system,” David E. Smith, adjunct professor of political science at Ryerson University, said in an interview.

The Trudeau government remains embroiled in controversy over a sole-sourced contract given to WE Charity, which has deep ties to the federal cabinet. Ethics Commissioner Mario Dion is investigating Prime Minister Justin Trudeau and Finance Minister Bill Morneau for violations of the Conflict of Interest Act for not recusing themselves from discussions about the contract.

A parliamentary ethics committee has also been looking at the issue, but Duff Conacher of Democracy Watch says committees can’t create as much scrutiny as a sitting Parliament.

“The parliamentary committees are good for bringing attention to issues, but they are kangaroo courts where everyone around the table is acting for political reasons, not based on the evidence or the law,” Conacher told The Epoch Times. “And we saw that with the Liberals filibuster, one of the committees, the ethics committee, trying to stop it from even coming to a vote.”

The seeds of the scandal were sown in April when Trudeau announced that a new Canada Student Service Grant would be provided to volunteers. In June, WE Charity received a sole-sourced contract worth up to $43 million to handle the new $912 million program.

Neither Trudeau nor Morneau recused themselves from cabinet discussions on the contract despite potential conflicts of interest. Trudeau’s mother was paid about $250,000 for speaking at 28 events, while his brother received roughly $32,000 for speaking at 8 events. One of Morneau’s daughters is employed by WE, and another daughter has spoken at 3 WE events.

Liberal connections to the WE Charity don’t end there. Current Liberal Chief of Staff Katie Telford and Minister of Natural Resources Seamus O’ Reagan helped raise $400,000 for WE Charity in 2010 and 2011.

WE Charity backed out of the contract on July 3. However, it has previously received five federal sole-source contracts worth $120,000. WE has also received nearly $5.2 million in grants and contributions from federal departments since 2017. It had only received $1 million from the federal government between 2012 and 2016 under its former name, Free The Children.

Conacher has called on Dion and the RCMP to investigate whether Trudeau or anyone acting on his behalf is guilty of a breach of trust.

“We know that Katie Telford took part in those discussions. We know that she was there. The question is, did she communicate in any way to try and direct things in a favourable way in WE’s direction? If so, it’s a breach of trust.”

Smith wonders why Trudeau, who has apologized for not recusing himself, didn’t have better judgment.

“It’s kind of inexplicable to me why the prime minister would have involved himself to the degree that he did. You’d think it would have been kind of obvious that this would instantly become known and would be detrimental to the Liberal party. I don’t quite understand that,” he said.

“Canada is in life-of-the-nation threatening danger if continuing efforts to expand executive power and ignore parliamentary requirements are not curtailed. It is to prevent unfettered dictatorship that Canadians have the historic and constitutional authority of Parliament to hold the executive to account between elections,” Hutchinson told The Epoch Times by email.

“A critical question is whether Canadians care enough to demand Parliament hold the government to account, or have we been lulled by months of daily announcements that more money is heading for citizens’ bank accounts?” he says.

The current probe by Dion is the third such ethics investigation into Trudeau’s conduct. He was found to have violated the Conflict of Interest Act in the previous two instances—his vacation on the Aga Khan’s private island and the SNC-Lavalin affair. Hutchinson says if a finding of guilt accompanied by a fine in the current case doesn’t deter the prime minister from future ethics infractions, “the pressure of Parliament and the public will.”