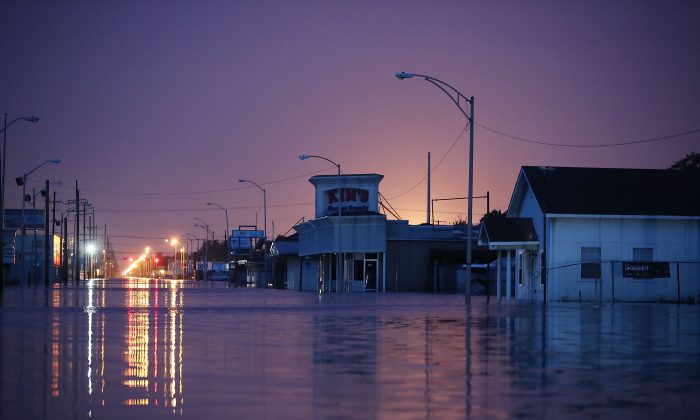 A street after it was inundated with flooding from Hurricane Harvey in Port Arthur, Texas, on Aug. 31, 2017. (Joe Raedle/Getty Images)
US

Aiden Pham was asleep in his mother’s arms as she was carried to safety by a police officer knee deep in floodwaters from Hurricane Harvey.

The 13-month-old baby boy was swaddled in a blanket. His peaceful slumber amid the chaos all around instantly stood out to David Phillip, a veteran photographer.

“It was just tender. It was very special,” Phillip told The Associated Press.

Phillip snapped a photo and the rest is history. The image of mom and baby in the arms of a first responder on Interstate 610 quickly became the face of the storm and the rescue operation.

“I was just keeping an eye out and as soon as I saw the SWAT team member carrying her and then seeing the baby, I just couldn’t believe that baby was wrapped up in there and not crying,” Phillip said.

The boy and his mom, Catherine Pham, were rescued from the Meyerland section of southwest Houston on Sunday, Aug. 27. The floods reached the roofs of many homes there, according to Phillip, who has been a photographer for AP in the area for 22 years.

“House is completely flooded, but at least we are all together,” Catherine Pham posted on her Facebook page late Sunday. “We are so thankful that God was looking over us today!”

The Phams were carried to safety by officer Daryl Hudeck. Wearing military fatigues and a baseball cap, he unwittingly became the symbol of the strength, bravery, and compassion of the rescue efforts.

Phillip, 51, had just a few moments to get the name of the baby and mother when they were taken to a police staging area on an elevated part of the highway.

He then rushed off to transmit the photos and was lucky to do so, because moments later the boat he was on bumped into something underwater, throwing him overboard. The boat motor scraped Phillip’s leg. Worse yet, before he was pulled to safety, the camera he was carrying was damaged by water and all the photos on it were lost.

Philip covered many hurricanes in the past but said that nothing could compare to Harvey, which hit his hometown.

“There’re moments that will always stick in your head—that one and something that happened a few hours before them, when a sheriff’s deputy had to go and rescue a guy from a flooded car,” Phillip said. “Just the terror on the gentleman’s face who was being rescued and just how dedicated our law enforcement is, just doing what they can to save people.”