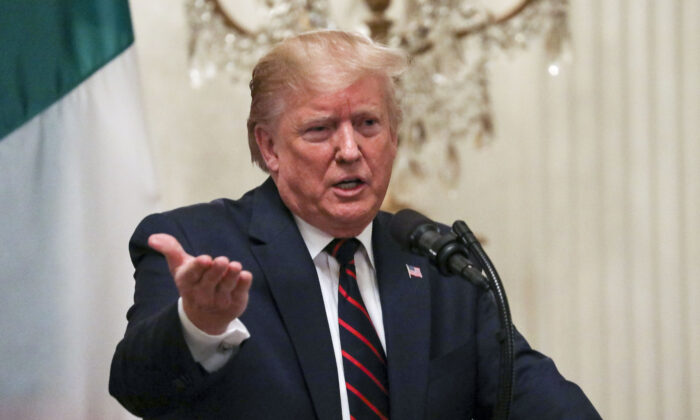 President Donald Trump at a press conference with Italy President Sergio Mattarella (not pictured) in the East Room of the White House in Washington in an Oct. 16, 2019, file photograph. (Charlotte Cuthbertson/The Epoch Times)
Middle East

Trump: ‘We Never Agreed to Protect the Kurds for the Rest of Their Lives’

President Donald Trump said that while the United States has a “good relationship with the Kurds,” America never agreed to protect the group.

The Kurds, an ethnic group found in parts of Iraq, Turkey, Iran, and Syria, fought alongside U.S. troops against the ISIS terrorist group in northern Syria.

After Trump announced he was ordering the withdrawal of U.S. troops from Syria, some critics said he was abandoning the Kurds, who aren’t friendly with Turkey.

Asked on Oct. 21 if he would leave a limited number of troops in Syria, Trump said no.

“I don’t think it’s going to be necessary. I don’t want to leave any troops there,” Trump said at the White House. “That’s very dangerous territory. You know, we have 28 troops, as it turned out. They said 50, it was 28. And you have an army on both sides of those troops. Those troops would have been wiped out.

Trump said the United States was asked by Israel and Jordan to keep a small number of troops in a different area of Syria, near Jordan and close to Israel, and that the United States had a small group there for now.

“They didn’t fight because they didn’t have us to fight with them. A lot of people are good when they fight with us, you know, when you have $10 billion worth of airplanes shooting 10 miles in front of your line, it’s much easier to fight.”

“Where’s the agreement that said we have to say in the Middle East for the rest of humanity, for the rest of civilization to protect the Kurds. We never said that,” he said. “And we have protected them. We’ve taken very good care of them. And I hope they’re going to watch over ISIS because again, most of it’s not in the safe zone as we call. Some places call it a demilitarized zone. In the old days, we’d call it a demilitarized zone. And our relationship with the Kurds is good. They’re going to be safe.”

The recent cease-fire deal between Turkey and the Kurds came, Trump added, because the fighting that erupted in the region “was so nasty.”

“When we went to Turkey and we went to the Kurds, they agreed to do things they would’ve never done before the shooting started. If they didn’t go through two-and-a-half days of hell, I don’t think they would have done it. I think you couldn’t have made a deal, and people have been trying to make this deal for years. But we’re close to making it. We’ll see what happens. Again, they’ve been fighting for 300 years that we know of. Three hundred years,” he said.

“So why should we put our soldiers in the midst of two large groups, hundreds of thousands, potentially, of people, and they’re fighting? I don’t think so.”