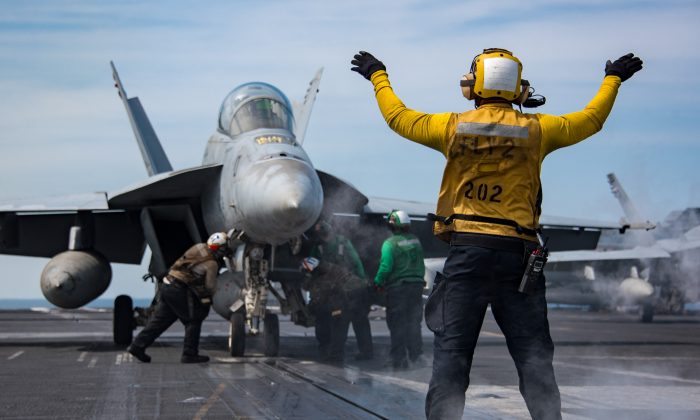 U.S. Navy sailors conduct flight operations Tuesday, May 2, 2017 aboard the Nimitz-class aircraft carrier USS Carl Vinson (CVN 70) in the western Pacific Ocean. U.S. Navy’s top leadership said on Monday that the size of the United States Navy is now at its “smallest in a century,” while still facing ever-rising threats. (Sean M. Castellano/US Navy via Getty Images)
US News

The U.S. Navy’s top leadership said on Dec. 4 that defense budget hiccups and uncertainty are hurting the nation’s efforts to maintain its sea power around the globe. The Navy is now at its “smallest in a century,” while at the same time facing ever-rising threats from the naval powers of multiple adversaries, including China.

At the U.S. Naval Institute’s 2017 Defense Forum Washington, Secretary of the Navy Richard Spencer said in his speech that the foundations of the Navy today are woefully underfunded. “If we don’t invest in our future, we will be in a corner,” said Spencer.

Speaking at the same event, Vice Chief of Naval Operations Adm. William Moran put it even more bluntly: “We need more money!” Moran said that the budgets awarded to the Navy must not only be in the right amount, but also be delivered at a steady pace so as not to jeopardize the Navy’s needs of maintaining ships, aircraft, equipment, and sailors for its many critical missions.

Spencer and Moran both called for an end to Congress’s established practice of providing temporary funds in the form of “continuing resolutions,” instead of passing formal budgets that would guarantee the Navy’s steady access to needed resources. The practice, combined with the 2011 Budget Control Act, has been increasingly criticized as putting unnecessary stresses and disruptions on the Navy’s operations, especially concerning maintenance and training.

If we don’t invest in our future, we will be in a corner.
— Richard Spencer, secretary of the Navy

The disruptions and inefficiencies resulting from continuing resolutions have caused the Navy to waste at least $4 billion, according to Spencer. “Since 2011, we have put $4 billion in a trash can, put lighter fluid on top of it, and burned it,” he said.

Spencer also warned that U.S. adversaries have been quickly making technological leaps that increasingly erode U.S. positions around the globe, and that these adversaries have shown a level of “renewed aggressions” that have not been seen before.

China’s ever-growing aggression in the South China Sea also shows how critical it is for the United States to maintain a strong presence in response, said Moran. He pointed out that the Navy, being significantly smaller today, cannot be expected to adequately respond to the growing threats it faces.

Speaking from his experience serving as a second lieutenant in the Navy during the 1980s, Moran said that at the height of the Cold War, the Navy could immediately deploy around 100 ships. That number remains the same today, he said, yet unlike during the Cold War, when there was only a single threat (the Soviet Union), the United States now faces multiple adversaries, including Russia and China.

The problems caused by the lack of funding appear in the daily operations of an overstretched Navy.

In response to questions from reporters, Moran said that “there was no question” that budget instability was a contributing factor that led Aegis destroyers USS Fitzgerald and USS John S. McCain to collide with commercial vessels earlier this year, causing the deaths of a combined 17 U.S. sailors. The hiccups in funding forced the Navy to “take risks they would not otherwise take” in critical areas such as training and certifications, said Moran.

In November, the Navy released the results of its investigations into the collisions of the two destroyers, and cited the “accumulation of smaller errors” and “over-confidence and lack of procedural compliance” as the primary causes. Such flawed practices were said to have been greatly exacerbated by the sub-standard levels of training and knowledge among the crews on both ships.

In addition to Spencer and Moran, Secretary of Defense Jim Mattis has also criticized the practice of continuing resolutions, citing the disruption and waste they cause in a Sept. 8 letter to Senate Armed Services Committee Chairman John McCain (R-Ariz.).

Despite the top naval chiefs’ public appeals and Mattis’s comments, Congress could still end up relying on continuing resolutions to fill up the gaps in the defense budgets this year, as the prospect of a government shutdown on Dec. 8 looms.