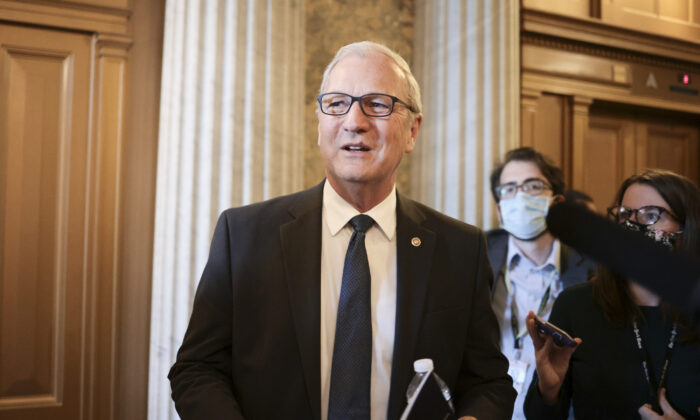 Sen. Kevin Cramer (R-ND) speaks to reporters as he departs from the Senate Chambers on Oct. 06, 2021. (Anna Moneymaker/Getty Images)
Taiwan

‘We Need Allies’: US Lawmakers Hail Bill That Would Boost Support for Taiwan

Andrew Thornebrooke
Reporter
Andrew Thornebrooke is a reporter for The Epoch Times covering China-related issues with a focus on defense, military affairs, and national security. He holds a master's in military history from Norwich University.
View profile
Follow
and Iris Tao

Legislators in the United States reacted favorably to the Senate Committee on Foreign Relations’ approval of proposed legislation that would restructure the U.S.-Taiwan relationship.

“We’ve never needed each other as much or more than we do now,” Sen. Kevin Cramer (R-N.D.) told NTD, a sister media outlet of the Epoch Times.

“This is a longtime friendship, but it is a friendship that really demands greater formalization.”

The act was approved by a bipartisan 17-5 vote. It will now move to Congress where it must be passed by both the House and Senate and then signed by President Joe Biden to become law.

The primary purpose of the bill is “to support the security of Taiwan and its right of self-determination,” though it would also enhance the island’s status to something closer to a formal diplomatic ally.

It would also direct the government to craft strategies to counter influence operations and economic coercion directed at Taiwan by the Chinese Communist Party (CCP).

Moreover, it would grant Taiwan $6.5 billion over five years for the procurement of military weapons from the United States.

The United States does not maintain formal diplomatic ties with Taiwan but, since the passage of the 1979 Taiwan Relations Act, the nation is bound by law to provide the island government with the arms necessary to defend itself.

When asked whether the language of the bill could be seen as a provocation of the CCP, Cramer said that the regime had already raised the stakes with its aggressive military deployments in the waters and skies around Taiwan.

“[China has] chosen to hurt the relationship,” Cramer said. “They’ve chosen to be much more aggressive.”

“We can’t simply sit back and not respond. We need friendships. We need allies. And, you know, I think it’s a mutual need. We’re simply responding to China’s aggression.”

To that end, the bill would create a non-binding resolution to designate Taiwan as a “major non-NATO ally” for the purposes of providing arms and would pave the way for Taiwan to participate in international organizations.

Rep. Steve Chabot (R-Ohio) said that the bill was a vital step to ensuring that Taiwan could maintain its defense and deter a possible invasion by the CCP, which has vowed to unite the island with the mainland.

“The US and Taiwan relationship is so important,” Chabot said. “We have to make sure that Taiwan is completely able to defend itself, it’s able to have a strong economy, and that it’s not going to be bullied by [China], which they try to do all the time.”