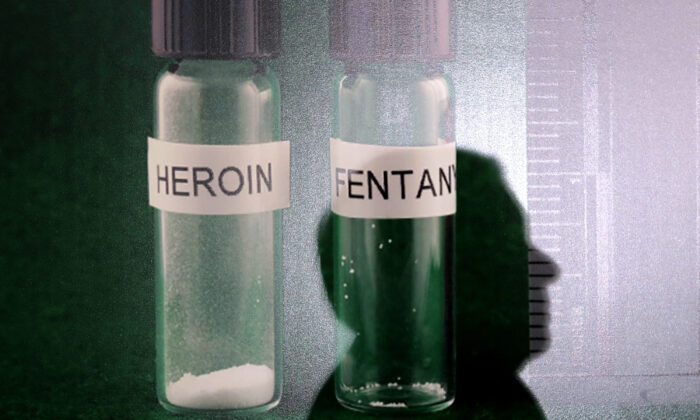 The shadow of a man is cast on a photograph of heroin and fentanyl during a news conference at Capitol Hill in Washington on March 22, 2018. (Chip Somodevilla/Getty Images)
Viewpoints

We Need a Smarter War on Drugs

Did we learn nothing from the so-called crack-cocaine plague of the ’80s and ’90s?

For those with fuzzy memories, the media back then erroneously and breathlessly declared that crack use had reached epidemic proportions. Newsweek declared crack was “the most addictive drug known to man.” The full truth would eventually come out. Crack was only half the problem.

Crack is created when powder cocaine is mixed with baking soda and water and cooked down into rocklike nuggets to be smoked in a pipe. It’s a relatively cheap high and favored by those in poorer neighborhoods. The more expensive powder cocaine was snorted primarily by higher-income Caucasians. What was happening in the ’80s wasn’t just a crack epidemic; it was also a cocaine epidemic—and poor and rich alike were addicted.

Congress bought the fake news that crack was the real problem and passed the ill-conceived Anti-Drug Abuse Act of 1986, which set a mandatory sentence of five years in federal prison for anyone convicted of possessing 5 grams of crack (equal to 1 teaspoon), even if it was their first offense. Thousands of mostly poor, young African American men were imprisoned, their families torn apart. Powder cocaine users were only sentenced to that mandatory five years in prison if they possessed 500 grams (or over a pound) of the drug. The racial disparity was painfully obvious.

The overcrowding of our prison system began. More importantly, the crime and drug problems in America did not lessen with these tough-on-crime sentences. Things got worse over the years, as addicts moved on to “black tar” heroin, meth, ketamine, ecstasy, and more.

Today, the deadliest drug is reported to be fentanyl—not the medically approved pharmaceutical fentanyl, an opioid that treats severe pain, but rather the illegally produced fentanyl, which is mostly smuggled into the United States via illicit laboratories in China and Mexico. Tens of thousands of Americans have died from fentanyl overdoses and other similar chemical compounds called analogues.

There are several bills pending in Congress now aimed at curbing distribution and use of fentanyl and its analogues. Some seek to label the addicting chemicals as highly regulated, Schedule I dangerous opioids, which opponents say could adversely affect future scientific research. But guess what is also being considered as a solution to this deadly problem? You guessed it—mandatory prison sentences for drug addicts and street dealers in possession of drugs containing fentanyl and its close cousins.

Reality check: Street-level sellers and buyers have no way of knowing if their drugs include fentanyl. It’s added in by criminal “chemical cookers” to give their drugs that extra punch that keeps customers coming back.

Attorney General William Barr hit the nail on the head at his confirmation hearing last year when he said, “The head of the snake is outside the country, and the place to fight this aggressively is at the source more than on the street corner.” Barr added, “We could stack up generation after generation of people in prison and it will still keep on coming.” Ironically, Barr has recently campaigned for passage of two bills that fail to focus on stopping fentanyl at the source.

When will lawmakers understand that locking up addicts and low-level dealers doesn’t stop the problem? It just creates another fractured generation of ex-cons and ever-mounting incarceration costs for us to pay. Going after the source of the product that poisons so many is a much smarter long-term tactic.

Spend more money interdicting shipments of fentanyl (and all illegal opioids!) coming into this country via the U.S. Postal Service. Outfit agencies like the Customs and Border Protection and the Drug Enforcement Administration with more personnel and technology to stop drug shipments headed this way, whether they’re arriving via air, sea, land, or border tunnels. Make foreign aid dependent on whether the receiving country helps stop the flow of drugs into the United States. And how about focusing on job training for convicted dealers and truly meaningful treatment for addicts so that upon their release, they become taxpaying citizens with decent jobs?

We need a modern-day war on drugs—one that is strong and focused on the source of the problem, not just on the addicted victims drugs create.