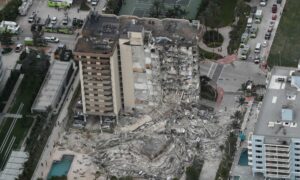 Florida Gov. Ron DeSantis said Friday that a “definitive explanation” is needed in a timely manner as to why a 12-story condo building partially collapsed in Surfside, Florida, amid search and rescue efforts in the aftermath of the deadly incident.

At a press conference in Surfside, a small suburb north of Miami Beach, the Republican governor said that he and Democrat Mayor Daniella Levine Cava of Miami-Dade County both agree there needs to be “a definitive explanation for how this could have happened.”

“And that’s an explanation that needs to be an accurate explanation,” DeSantis said of the partially-collapsed Champlain Towers South building. “It’s an explanation that we don’t want to get wrong, obviously, but at the same time I do think it’s important that it’s timely—because you have a lot of families here, you have families that lost loved ones in this building collapse. They have a right to know. You have other folks who were able to get out safely, but then lost their homes. … They have a right to know as well.”

“There’s a lot of other people throughout this community and throughout Florida who want to know ‘well how can a building just collapse like that?'” he added, describing the situation as a “unique type of tragedy.”

About half of the residential oceanfront apartment building in Surfside collapsed at about 1:30 a.m. on Thursday. At least 159 remain unaccounted for and may or may not have been in the building. Four people have been found dead.

Of the building’s 136 units, about 80 were occupied, according to reports.

DeSantis said that the state of Florida will support any local efforts underway to investigate the cause of the collapse, adding that President Joe Biden has said that federal personnel can also join the investigation if needed.

Video that captured the collapse showed the center of the building appearing to tumble down first, and a section nearest to the ocean teetering and coming down seconds later, throwing up huge clouds of dust.

The Champlain Towers South was built in 1981 and was in the process of being recertified as part of Florida’s 40-Year Recertification Program. The 12-story tower was undergoing roof construction and other repairs prior to the collapse.

Surfside Mayor Charles Burkett told reporters on Thursday that roof work gets done on buildings “all the time” and that “it’s hard to imagine that that could have been the impetus for such a catastrophic collapse, and I’m sure that it probably wasn’t.”

He also said, “There’s no reason for this building to go down like that unless someone literally pulls out the supports from underneath or they get washed out or there’s a sinkhole or something like that, because it just went down.”

“Buildings in America do not fall down like this,” Burkett told CBS Miami in a separate interview. “Something very wrong happened here, and we need to understand what happened.”

He told NBC’s “TODAY” show, “I mean, it looks like a bomb went off, but we’re pretty sure a bomb didn’t go off.”

Correction: A previous version of this article incorrectly named the location of the Champlain Towers South. The building is located in Surfside, Florida. The Epoch Times regrets the error.