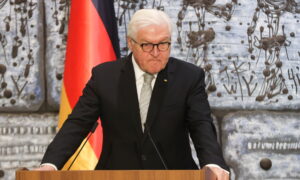 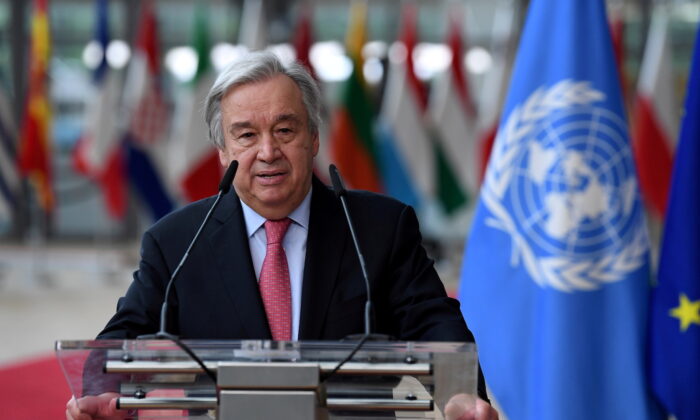 Secretary-General of the United Nations Antonio Guterres addresses the media as he arrives on the first day of the European Union summit at The European Council Building in Brussels, Belgium on June 24, 2021. (John Thys/Pool via Reuters)
International

‘We Must Unite’ and Fight Global Terrorist Threat in Afghanistan: UN Chief

United Nations (UN) Secretary-General António Guterres called on the world for unity and to fight the “global terrorist threat” in Afghanistan as Taliban insurgents took control of the nation’s capital over the weekend.

Guterres appealed for the UN Security Council and the international community to work together and ensure that human rights are upheld in the war-torn nation and make sure that Afghanistan never becomes a platform for terrorism again.

“We must unite to make sure Afghanistan is never again used as a safe haven for terrorists,” the Portuguese national who has served as chief of the UN since 2017 said during an emergency meeting on Monday.

“I appeal to the Security Council—and the international community as a whole—to stand together, to work together and act together, and use all tools at its disposal to suppress the global terrorist threat in Afghanistan,” he said.

The 15-member council issued a statement, agreed by consensus, after the chief appealed to the body to “use all tools at its disposal” to suppress threats from Afghanistan.

Guterres also expressed concerns to the UN ambassadors about the future of Afghan women and girls as he highlighted the need to protect civilians and allow humanitarian access.

The Taliban ruled Afghanistan between 1996 and 2001. They did not allow women to work, girls were not allowed to attend school, and women had to cover their faces and be accompanied by a male relative if they wanted to venture out of their homes.

A U.S-led invasion in Afghanistan following Al-Qaeda terror attacks in New York City on Sept. 11, 2001, ousted the terror organization’s authority from the nation for 20 years.

Over the past weeks, Taliban forces swiftly captured one provincial capital after another and ended up taking control of Kabul, the nation’s capital, on Aug. 15, prompting many nations globally to evacuate citizens and diplomats.

The nation’s return to Taliban extremist rule came as the United States and other foreign forces were leaving the country after two decades.

On Tuesday, the U.S. and Western allies evacuated diplomats and civilians from the Afghan capital as the “new rulers” were to hold their first news conference. Evacuation flights resumed after the runway at the airport in Kabul was cleared of thousands of people desperate to flee following the sudden takeover of the capital.