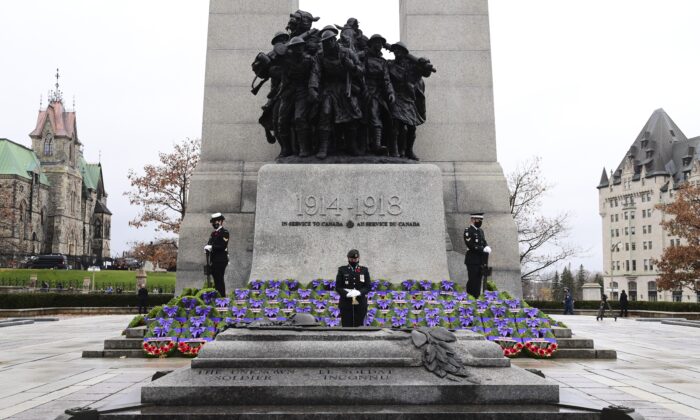 Sentinels stand guard during the Remembrance Day ceremony at the National War Memorial in Ottawa on Nov. 11, 2020. (The Canadian Press/Sean Kilpatrick)
Viewpoints

We Must Not Lose Sight of the Importance of Remembrance Day

It is hard to truly appreciate something without an understanding of the work and sacrifice that went into creating it. We are fickle creatures and can be prone to taking things for granted.

In Canada, we have been blessed with generations of peace and relatively easy living. We enjoy some of the most abundant personal liberties on earth and have little experience with state incursions upon our rights. At least, we did until now.

Recent events have indicated an erosion of our appreciation for our freedoms. Liberties such as free association, religion, and mobility have been suspended in the name of battling the COVID-19 pandemic, while most citizens haven’t batted an eye.

Section 1 of the Charter of Rights and Freedoms gives the state an out when it comes to suspending rights. It says our rights are subject to “reasonable limits.”

That is a reasonable caveat within the document. In times of war or unusual circumstances such as a pandemic, the need may arise where some liberties may be temporarily suspended. This should only be done in the most extreme and unusual of circumstances.

I am not so much concerned with the use of Section 1 of the charter as I am with how easily Canadians accepted the use of it. That’s not to say I’m not worried about the current suspension of rights in Canada. I’m just saying that our docile acceptance of the removal of our rights is an indication of a much deeper and dangerous societal problem. In our decades of good living, we have begun to forget how hard-won those rights were for us.

Over a century ago, Armistice Day (now Remembrance Day) was created in commonwealth countries for the purpose of ensuring we never forget what went into the freedoms we have. The world had just experienced the hell and tribulations of widespread modern warfare. World War I was called the “war to end all wars” in dark optimism.

Veterans and leaders at that time hoped that if we made sure to pass on the memories of the horrors of war, we wouldn’t need to live through it again. Unfortunately, World War II came about and millions died again in a battle for our freedoms. The principle of remembrance endured, and thankfully the world hasn’t seen a war of the like since.

Our forefathers didn’t want us to ever have to experience what they did in order to appreciate our freedoms. They hoped that if we made enough effort to remember the sacrifices made to preserve our freedoms, we would never let those freedoms erode.

Remembrance Day is one of our most important national observances and it has been falling by the wayside. Attendance at ceremonies has been dropping for decades, and many leaders of today appear to pay lip service rather than veneration to the service of our veterans.

The nation should be appalled at how Prime Minister Trudeau so flippantly treated the issue of lowering the flag for Remembrance Day.

It wasn’t until Trudeau was cornered on the issue of giving proper observances on Remembrance Day that he sought compromise and made allowances for the national flag to be raised, and then lowered again for the ceremonies. Given Trudeau’s past conduct, his latest move and what can only be seen as indifference to the sacrifice of veterans comes as no surprise. It’s the lack of national concern that worries me.

Not lowering the national flag on Remembrance Day would never have been considered for a second only a few decades ago. Lowering the flag is the most solemn way that a nation can demonstrate mourning and respect. We actually came close to not doing so, and most of the country didn’t even notice.

The need to fight for freedoms didn’t end with World War II. Men and women from Canada have served in a myriad of conflicts since then and many have paid the ultimate sacrifice. Thousands of veterans among us today sustained injuries, physically and mentally, and we must never let them think we don’t appreciate what they have done.

Over the last century, wars have killed more people than COVID-19 ever will. The loss of freedoms presents a much larger threat to the well-being of humanity than the pandemic does. When a state takes away rights, it is often loathe to return them. Our passive, complacent acceptance of the suspension of our rights has taught authoritarians that we are pushovers in the face of a declared emergency.

We aren’t living in a totalitarian dictatorship by any means, but the path to that condition always begins with the erosion of individual rights.

The only way we will be able to avoid eventually going to war in order to regain our freedoms is to listen to the veterans who already did. They experienced war on our behalf, and they want us to remember it.

Remembrance Day isn’t just a day to pay our respects to veterans, it is an observance designed to keep us from repeating history. We are losing sight of the importance of that day, and we may all pay a terrible price for that.