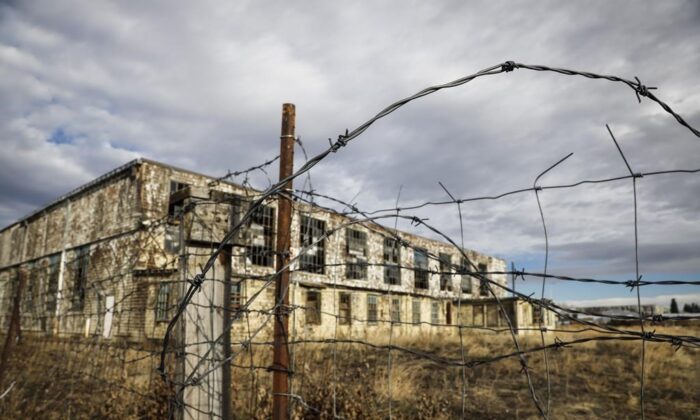 A hanger on the site of a WWII era RCAF training base near Claresholm, Alta., Nov. 4, 2021. (The Canadian Press/Jeff McIntosh)
Canada

Only scraps of its original white paint remain. The rest has been sandblasted away by 80 years of winds that sweep down from the Rocky Mountains west of the town of Claresholm, Alta.

Most of the windows are broken. The hangar’s lone occupants appear to be three pigeons perched on top of a closed door.

The building is surrounded by a twisted metal fence with barbed wire and ‘No Trespassing’ signs.

There were originally seven hangars in Claresholm, 135 kilometres south of Calgary, that were built as part of one of Canada’s contributions to the Second World War.

In 1943, there were 107 air-training fields across Canada as part of the British Commonwealth Air Training Plan. It was a major program for Allied aircrews during the Second World War.

The Claresholm training base turned out pilots and another airfield 60 kilometres away, near Vulcan, trained pilots and flying instructors.

The Vulcan base was eventually purchased privately. Some of the hangars have been repurposed, but in others the roofs have caved in, allowing sunlight to stream into the buildings.

Hank Jackson, 100, was a tail gunner on a Halifax bomber. He received his training near Portage la Prairie, Man., at the No. 3 Bombing and Gunnery School. He recently paid a visit to the Claresholm airfield.

“I like to see these. There’s something about it. There’s a few places with some of the old buildings left. It brings back a lot of memories,” said Jackson, who flew 32 combat missions. All members of his crew received Distinguished Flying Crosses from the United States armed forces.

“It was a great time in my life. I enjoyed it. Maybe at the time I didn’t.”

Jackson, who also was awarded the French Legion of Honour four years ago, joined the Calgary Police Service after he left the military and retired after 35 years.

He said he always knew that dying was a possibility when he embarked on missions.

“There’s no way I was going to get out of that turret … and I always thought if it’s going to happen make it bloody quick. I didn’t want to go down in flames like most of them seemed to go,” Jackson said.

“Someone was looking after us, the Good Lord I guess, and we managed to survive.”

Karl Kjarsgaard, curator of the Bomber Command Museum of Canada in Nanton, Alta., said only a handful of the air-training fields are left. Many have been bulldozed and replaced with a simple monument.

“The history here is great and what the people need to know in Canada is this base is just like the bases across Canada. No major bombing raid in World War 2 could have been a major bombing raid without this kind of facility,” Kjarsgaard said.

“For me, as a historian, the British Commonwealth Air Training Plan is one of Canada’s greatest achievements in over 150 years of Confederation.”

Almost half the total aircrew personnel who served in British and Commonwealth flying operations during the Second World War were graduates of the program. The majority of graduates, almost 73,000, were Canadian.

Murray Frame, manager of the Claresholm site, is proud that six of the seven hangars are still intact.

Four of Frame’s uncles served in the Second World War, including a pilot, two mechanics, and a tail gunner.

“We’ve lost one hangar that got so badly dilapidated that it was condemned and bulldozed. But there’s still six left and all but a couple of them have companies in them that are restoring or rebuilding them into viable industrial buildings,” said Frame.

“You can’t even get beams like those that are inside. They’re over 100 feet long and they’re still there.”