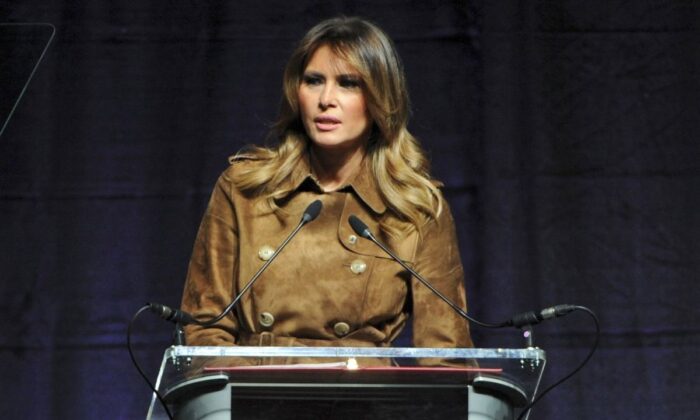 ‘We Live in a Democracy’: Melania Trump Speaks Out After Students Boo Her

First lady Melania Trump suggested that she wouldn’t be deterred by the negative reaction she got from Baltimore-area students as she spoke about the youth opioid epidemic on Tuesday.

“We live in a democracy and everyone is entitled to their opinion, but the fact is we have a serious crisis in our country, and I remain committed to educating children on the dangers and deadly consequences of drug abuse,” Trump said in a statement later on Tuesday.

She traveled there to urge high and middle school students to not use drugs. But as she spoke, some members of the audience booed her, according to video footage of the event.

The boos lasted for about one minute, CNN reported. There were some cheers.

“Thank you to all of the students who are here. I am so proud of you for the bravery it takes to share that you have been strongly affected by the opioid epidemic in some way,” the first lady said above the noise. She had her talk as part of her “Be Best” campaign at the University of Maryland in Baltimore County.

Baltimore is Ground Zero in the opioid crisis, data suggests. According to the City of Baltimore, in 2017 there were 692 opioid-related deaths in the city.

“This is more than double the number of people who died of homicide. Baltimore City now has the highest overdose fatality rate of any city in the United States,” the city’s website says.

In her address, the first lady noted that the students in attendance have “hopes and dreams for the future, whether it is college, joining the military, or playing a sport, your future will be determined by the choices you make. Using drugs will only slow you down and prevent you from achieving those goals.”

The students’ antics drew condemnation from at least one elected official.

Absolutely disgraceful that @FLOTUS was repeatedly booed at Youth Opioid Summit in Baltimore. If any issue should be free from abusive, rude behavior, it should be protecting kids from opioids. Has the left no sense of decency?!?

Rep. Pete King (R-N.Y.) on Tuesday lambasted the students for their lack of civility as the first lady of the United States spoke.

“Absolutely disgraceful that @FLOTUS was repeatedly booed at Youth Opioid Summit in Baltimore. If any issue should be free from abusive, rude behavior, it should be protecting kids from opioids. Has the left no sense of decency?!?” he tweeted on Tuesday.