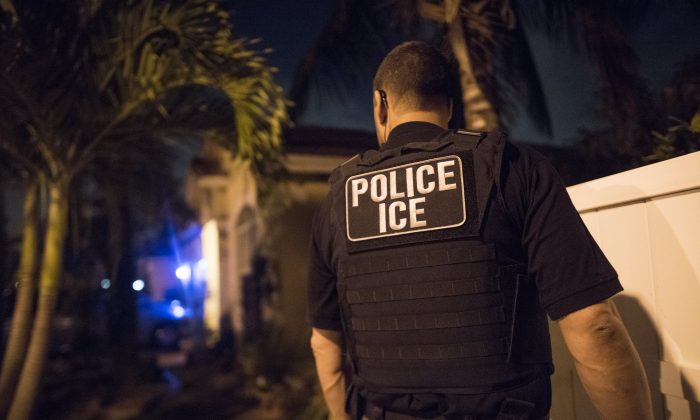 An ICE agent takes part in an operation in Florida, Puerto Rico, and the U. S. Virgin Islands, on March 21, 2018. (ICE)
Crime and Incidents

Leftist protesters in Florida appeared to dox and threaten a former key employee of an Immigration Customs Enforcement (ICE) contractor, just one day before shots were fired into an office of that same company in Texas.

The Texas office of GEO Group—which provides facilities to detain illegal aliens—was shot at on Aug. 13, along with a nearby ICE office in an incident being investigated by the FBI as a “targeted attack.”

Footage published by Breitbart News shows protesters in Florida outside of the GEO Group building on Aug. 12 apparently revealing private details about GEO Group’s former general counsel, John Bulfin, and his family, over a megaphone.

Why isn’t this receiving wall-to-wall coverage by the Establishment Media? pic.twitter.com/PNkT7CHtjM

The tactic echoes a strategy outlined in a New York Times op-ed in late June, which called for the actions of individual border agents to be spread among their community as a “pressure” and “consequence” of carrying out their duties.

The author specifically claimed that she was not making a case for “doxxing”—which is usually defined as the publication of private information for the sake of revenge or punishment. Many commentators and publications nonetheless characterized her article as precisely a call for doxxing of border agents.

A spokesperson for the GEO Group told Breitbart that the protest in Florida was political.

“The fact is that the services we provide in our facilities today are in no way different than the high quality, professional services under the same standards that we provided for eight years under President Obama’s administration,” said GEO Group VP of Corporate Relations Pablo Paez. “So where was the outrage then?”

Following the attacks on the offices in Texas, according to KABB-TV. ICE field agent director Daniel Bible blamed “political rhetoric and misinformation that various politicians, media outlets and activist groups recklessly disseminate to the American people.”

When the acting DHS Secretary Kevin McAleenan was asked about the field director’s analysis on Fox News, he said, “I think the environment where we are demonizing law enforcement for doing their jobs for enforcing a law on the books is concerning.”

The attacks in Texas are being investigated as a federal crime, FBI Special Agent in Charge Christopher Combs told reporters on Aug. 13, according to My Antonio.

“Had the bullets gone two inches in another direction, we could be talking about the murder of a federal official,” he said.

A Call to Action

The New York Times published an op-ed on June 29 suggesting the identities of U.S. border agents be “publicized” if they have participated in separating children from their families in the course of their duties.

“The identities of the individual Customs and Border Protection agents who are physically separating children from their families and staffing the detention centers are not undiscoverable,” wrote Dr. Kate Cronin-Furman, a lecturer in human rights at a London university in the opinion piece published in The New York Times on June 29.

“Immigration lawyers have agent names; journalists reporting at the border have names, photos, and even videos. These agents’ actions should be publicized, particularly in their home communities.”

Doxxing, a relatively recent term spawned by the age of the internet, is defined by the Merriam-Webster dictionary as a slang word meaning “to publicly identify or publish private information about [someone] especially as a form of punishment or revenge.”

According to some law firms, in the case of a private individual, doxxing in itself may not break the law, though it may constitute other crimes, such as harassment, in some situations.

Publicizing the names alone of government officials is not a crime, and releasing the personal details of private individuals is not against the law in itself. However, it is illegal to publicize private information of government agents.