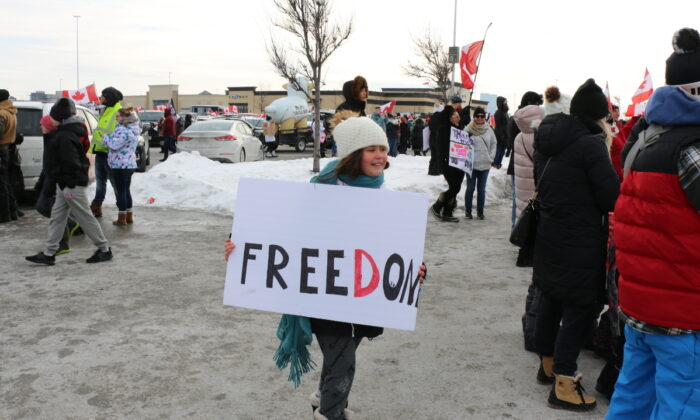 A child was seen holding a sign that reads "Freedom," at Vaughan Mills, northwest of Toronto, Ontario, on Jan. 27, 2022. Several thousands of supporters came out to cheer on the "Freedom Convoy 2022" that passed through the city en route to Ottawa. (Andrew Chen/The Epoch Times)
Canada

‘We Have Uplifted People With This Movement,’ Says Truck Convoy Organizer

An organizer of the “Freedom Convoy” heading to Ottawa to protest the government’s COVID-19 vaccine mandate and other pandemic-related restrictions believes the effort is inspiring Canadians.

“We have uplifted people in this country,” said Martin Brodmann, president of Truckers United and vice president of Canada Unity, which organized the convoy.

“We uplift not only the people, we not only uplifted the country, the whole world is watching upon us.”

Brodmann says the movement goes beyond the vaccine mandate imposed on the cross-border truck drivers and represents Canadians’ overall thirst for freedom from pandemic restrictions.

“A trucker brings the goods, not only to the people, but also to the industry. And the truckers feel … the broken hearts we have today,” Brodmann told The Epoch Times.

“Every trucker out here to support this movement used to bring goods, but today, they deliver the most important thing: freedom.”

The demonstration, to be held in Ottawa over the weekend of Jan. 29 and into next week, was initially about protesting the COVID-19 vaccine mandate that requires cross-border truck drivers who have not been vaccinated against the virus to quarantine for 14 days after re-entering Canada from the United States. The convoy gained widespread support as it made its way across the country, and many who are upset with other pandemic restrictions and mandates joined it.

On Thursday, several thousand supporters came out to root for the truck drivers as the convoy rolled through the Toronto area, while supporters across the country gathered at roadsides and on overpasses to cheer on the passing fleet.

When asked if he is concerned about the possible participation of counter-protesters, such as Antifa, starting trouble for which the truckers might get blamed, Brodmann said he is not aware of any such activities, but would condemn any violence.

“We really condemn that. It’s not what we are,” he said.

“The last 18 months has brought so much disruption into family, into friendships, businesses, people who lost their jobs, people who don’t know anymore what to believe. And we try to unite and live in unity again, in peace, and bring hope and love again. That’s what we are.”

Ottawa Police Service Chief Peter Sloly said Friday that the city police have been in close contact with the Freedom Convoy organizers, and said the several smaller protests that have already taken place at the capital over the past 24 hours have been peaceful.

He added that the police will be ready to respond to any unlawful acts committed by individual participants.