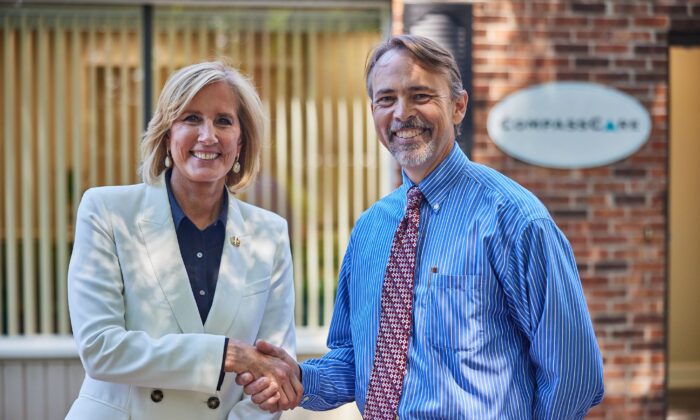 Rep. Claudia Tenney (R-N.Y.) and CompassCare CEO Rev. Jim Harden at the reopening of the CompassCare Pregnancy Services center in Amherst, N.Y., on Aug. 1, 2022. (Courtesy of CompassCare)
US News

‘We Have to Start Valuing People Again,’ CompassCare CEO Says as Center Recovers From Firebombing

As CompassCare’s Buffalo office reopened months after being firebombed, Rev. Jim Harden, the president and CEO of the pregnancy service provider vows to continue their work and calls on Americans to value human lives.

“This is the most important cultural moment in 150 years,” he told The Epoch Times.

Respecting human lives including those unborn ones will not only benefit the United States economically but also help restore respect in society.

The Buffalo office—which provides ethical medical care and comprehensive community support to women who are considering abortion—was firebombed by pro-abortion activists on June 7.

The building was heavily damaged by fire and vandalized with pro-abortion graffiti.

Harden said he has been receiving death threats too.

It took almost two months and cost half a million dollars to reopen the office.

The rebuilding process was also slowed down because of supply chain issues, material shortages, and labor shortages.

However, CompassCare also got generous help for alternate medical space and in restoring the original facility from a church and residents in Buffalo.

Jane’s Revenge, a self-claimed umbrella group for some pro-abortion groups, seemed to claim responsibility in a statement posted online six days after the attack.

As the office reopened, Harden vowed to continue CompassCare services.

“We’re not going to stop just because we have government actors and domestic terrorist groups that are violent and differ with us,” he stated.

No Arrest After 50 Attacks

FBI didn’t arrest any suspect after the June 7 firebombing, the government launched an investigation against CompassCare instead, Harden said.

FBI’s handling of the CompassCare case is nothing unusual.

According to a list compiled by the CompassCare CEO, there were 50 attacks that happened to pro-life organizations nationwide between 2021 and 2022.

The FBI hasn’t arrested anyone after those attacks.

The incidents on the list include the one that happened in Madison, Wisconsin, on May 8 in which a pro-life political action committee was firebombed and vandalized with graffiti.

The FBI sent The Epoch Times a statement saying they are “investigating a series of attacks and threats targeting pregnancy resource centers, faith-based organizations, and reproductive health clinics across the country.”

When asked to confirm if any arrests have been made after the attacks against pro-life organizations, the federal law enforcement agency told the reporter to check public records.

The public court information system including the Public Access to Court Electronic Records (PACER) doesn’t show any record of arrests after attacks against pro-life groups.

However, in contrast, when a pro-abortion organization was attacked in Kalamazoo, Michigan, the authorities acted very quickly.

A suspected arsonist was arrested within four days after fires were set at a Planned Parenthood in Kalamazoo in July.

“I’m glad that they found the potential perpetrator [in the Parenthood case]. But what do they do for us? Over 50 attacks on pro-life organizations, not a single arrest,” he said.

“We believe in justice; we want justice to be done,” he said.

Conservative politicians and activists share Harden’s concern about the FBI.

U.S. Senate Judiciary Committee Ranking Member Chuck Grassley (R-Iowa) warned that the FBI is losing public trust after years of politicization in a statement in the wake of the FBI’s raid of former President Donald Trump’s residence Mar-a-Lago.

“If the FBI isn’t extraordinarily transparent about its justification for yesterday’s actions and committed to rooting out political bias that has infected their most sensitive investigations, they will have sealed their own fate. The FBI’s mission and the many patriotic agents who work hard to carry it out will be forever overshadowed by the distrust the bureau has sown,” he wrote on Sept. 8.