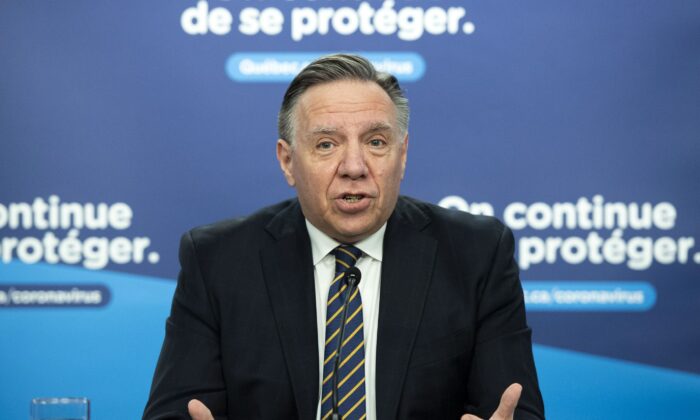 Quebec Premier Francois Legault speaks to the media at a COVID-19 press briefing in Montreal on Jan. 25, 2022. (The Canadian Press/Graham Hughes)
Viewpoints

We Have Drifted Too Far to Recover Reason

The first two obviously refer to the playful atmosphere of the protest so evident in videos and live streaming. Despite the city’s usual lugubrious February weather, the days-long campaign against vaccine mandates and related state anti-COVID measures has been routinely compared to Canada Day for its family-friendly, flag waving, singing-dancing visuals.

Metaphorically, the word “snipers” refers to the mood of menace many media reports insist citizens reportedly feel because some downtown streets remain clogged with big rigs two weeks after the convoy arrived. The air filled with the sound of truckers’ air horns is a contributor as well. Even an intermittent 80-decibel din in a small apartment could put anyone on edge.

But “snipers” also has a real-world point of reference, however. Rumour has it police marksmen were on the roof of a building across the street from a locale that Ottawa’s finest raided this week in search of suspected trucker-miscreants who were allegedly illegally storing containers of gasoline. The rumours weren’t dampened by the city’s police chief figuratively setting his hair on fire with a public demand to hire 1,800 more officers to control the mayhem and, who knows, perhaps deflate some of the bouncy castles.

Watching from a distance, I find it impossible to reconcile the starkly divergent images of the protest. But having lived and work in Ottawa for three distinct periods of my career, and loving the place dearly, I can confidently say that the truckers and protesters made a serious strategic error by picking it as their point of celebration and demonstration. I say so for two reasons.

The first is best illuminated by the immortal words of Huddie Ledbetter—better known as Lead Belly—in his classic The Bourgeois Blues: “‘Cause it’s a boojwah town/ Uhm, a boojwah town/ I got the boojwah blues/ Gonna spread the news all around.”

If Ottawa is anything, it is the quintessential Canadian boojwah town. The populace is singularly ill-equipped to deal with even slightly impolite pushback against hallowed government edicts, and almost genetically predisposed to antsy panic if those without the requisite civil service status get uppity ideas about involvement in public policy. You want riots and unkempt occupiers? Montreal, Toronto, Vancouver, even Winnipeg, we got ‘em. Ottawa? A homeless inebriate raises his voice in the Rideau Centre and it’s call out the cavalry.

But there is an even more serious reason why taking the protest to Ottawa was flawed. In many ways the protesters walked into a trap, or at least chose to fight on the opponents’ terrain, that is in a capital city where the media-politico apparatus already occupied the high moral ground through its complete control of the propaganda machinery. The campaign, then, was really over before it started. Now, the Freedom Convoy is bogged down in its own braggadocio-fuelled insistence that it wouldn’t leave until its demands are met.

What should have been a bright moment of revival for democratic dissent in Canada has deteriorated into the drudgery of keeping the ruder and more reckless members of the contingent out of trouble. It has pitted those whose intentions were liberty against a bourgeois citizenry that craves safety über alles. Freedom has become, in fact, the enemy. Those who sought to restore it are identifiable. We have, rumour has it, snipers on the roof keeping a bead on them.

Gone, too, is any possibility of rational appraisal of state policies imposed to quell COVID. The vaccine mandates that were the catalyst for the truckers’ protest convoy initially now have the warrant of sacred scripture about them. Anything done by government to counter the pandemic is not a necessary evil, but a positive good.

Two years of misbegotten government tomfoolery that did absolutely zero to combat the virus is waved away with the hocus-pocus mantra of “follow the science.” The phrase still tumbles out despite the reality that for great swathes of time the scientists driving the science had no clue what constituted practical, effective public policy.

So far have we drifted from any attempt to recover reason, not just in Ottawa but across the country, that Premier François Legault was able to capitalize on the fearmongering that’s gone on in Canada’s capital and vow drastic action for any members of the Freedom Convoy who pitched up in Quebec City last weekend. There would no tolerance, Legault warned darkly, of anything that interfered with “people enjoying normal life” in la vielle capitale.

Normal life. Yes, he actually said those words. The man who has twice imposed draconian, utterly pointless curfews on Quebecers during the pandemic. The premier who has made it impossible to shop in large stores without first showing a vaccine passport. The leader who, until saner heads talked him down form the political bridge, was going to impose a special tax on the unvaccinated whether they were infected with COVID or not.

Normal life? The very phrase falling from his mouth should have produced shrieks of hysterical laughter as if 8.4 million people were all jumping on an insanely large bouncy castle at the same time.

But no. Fear of the Freedom Convoy was enough to silence us as if snipers had us all in their sights.