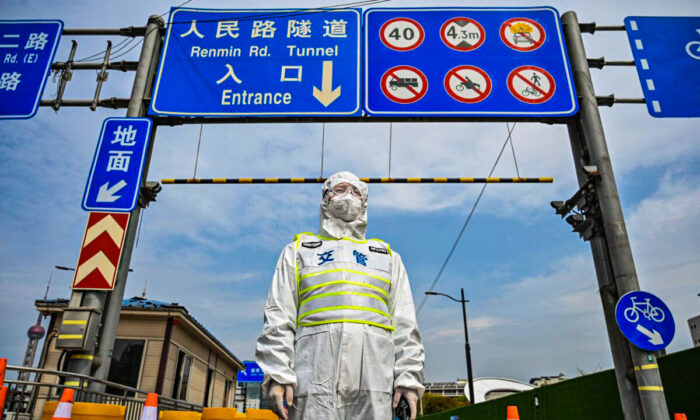 A transit officer, wearing protective gear, controls access to a tunnel in the direction of Shanghai's Pudong district in lockdown on March 28, 2022.(Hector Retamal/AFP via Getty Images)
Business Columnists

The horrific scenes in Shanghai in the last few weeks, as residents face starvation because of the way China’s Zero-COVID policy is being enforced, reminded me of my first trip to China over forty years ago, when I ran a conference between Australian and Chinese journalists in November 1981.

The seminar itself was a fascinating experience, but the key issue which today’s catastrophe brings to mind was a bizarre pair of economic statistics. Just before the Australian delegation departed for Beijing, China announced that light industry output had risen by 17 percent in the previous year—but heavy industry output had fallen by 7 percent.

This pair of numbers simply didn’t make sense. Light industry—bicycles, lights, consumer goods in general—requires inputs from heavy industry—steel, cement, etc. How on earth could light industry rise so much while heavy industry fell? Getting to the bottom of this conundrum was a key objective for the seven Australian journalists who attended this conference.

Our Chinese counterparts at the seminar couldn’t give a satisfactory explanation, but the subsequent tour finally provided an answer; one which I believe is relevant to the heavy-handed way in which China is enforcing its anti-COVID lockdown today.

To every question we asked of virtually anyone, the first answer was the quote that headlines this article: “We followed the directives of the Central Committee of the Communist Party of China.” If you asked someone what they had for breakfast, that’s what they’d first say, before mentioning Congee or Dòujiāng. This obsequious reply became key to my understanding of the China that Mao created.

The answer to our statistical conundrum was provided by an official whose title was translated to us as the “Economic Boss of Shanghai.” He gave us that stock standard answer to our question: “We followed the directives of the Central Committee of the Communist Party of China.”

After it, one of the journalists asked him “But what does that mean?” He elaborated that “the Central Committee sent out a directive to promote light industry.” Someone else followed up with “So, what did you do?” His answer, translated for us by our wonderful guides, remains etched into my brain over four decades later: “We stripped heavy industry factories and turned them into light industry.”

Good grief. That is no way to manage an economy. Why on earth was that done?

It came down to how one survived a totalitarian regime when one was actually part of it. The Central Committee of the Communist Party was all-powerful, but it was also factionalized. One faction would be dominant, and its orders would be transmitted from its 300 or so members to the 30 million members of the Communist Party itself as a slogan—like “promote light industry”—rather than a detailed set of plans, because communications were primitive, as were the education levels of the recipients of the orders.

These orders would inevitably lead to catastrophes, and the only way that the hapless enforcers of these orders could protect their butts from the inevitable backlash was to carry them out to the letter. Then, if you were to be punished, so would be the people who gave them to you—the dominant faction in the Central Committee itself. As an underling, you would survive, while the consequences of the failure would play out in the endless factional battles within the Central Committee.

So, if the directive was to “promote grain,” local officials would order the peasants to pull up legume crops and plant grain instead. One year later, there would be bountiful grain, but not enough protein, and children would be born with Kwashiorkor, the protein deficiency disease—as we observed in Sichuan province on that tour. The consequence of the dominant Central Committee faction being pro-grain was not a balanced emphasis upon legumes, but local officials ordering peasants to dig up legume crops and planting grain instead.

The peasants, who had no choice but to obey the “promote grain” orders, would rise up when their newborn children paid the consequences, the revolt would percolate up the Communist Party system, the dominance of factions would swap, the new directive would be “promote legumes,” grain crops would be dug up and replaced with legumes, and a year later there would be a famine.