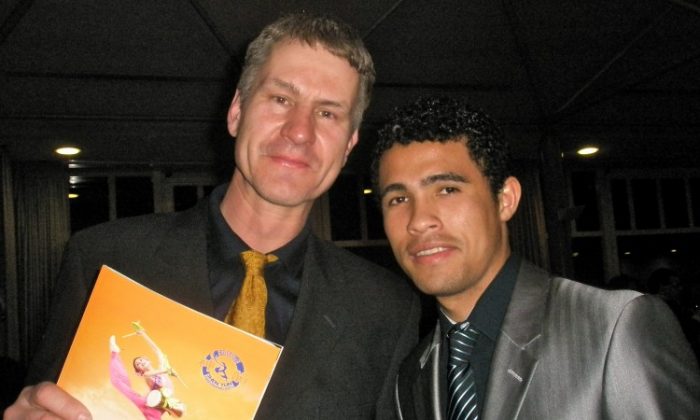 “I think it gives a positive mood for life, really positive, for art and living with a good heart,” said painter Bernd Raymar Alder, who attended the special invitation-only performance. “And after the show we feel really happy, that’s what I feel is especially important.”

New York-based Shen Yun transverses the globe delivering classical Chinese culture, which was profoundly influenced by the three main religions of Buddhism, Taoism, and Confucianism, spawning a rich and profound system of values, according to Shen Yun’s website. “The concepts of “man and nature must be in balance,” “respect the heavens to know one’s destiny,” and the five cardinal virtues of benevolence, righteousness, propriety, wisdom, and faithfulness (ren yi li zhi xin) are all products of these three religions’ teachings,” it states.

However, this tradition was nearly decimated by more than 60 years of communist rule in China. Shen Yun, which literally translates as: The beauty of divine beings dancing, is on a mission to show people the essence of the 5,000-year-old, divinely inspired culture of China, according to its website.

Various aspects of the performance enchanted Mr. Alder, especially from a professional artists’ point of view. “It’s very nicely done with a lot of colors,” he said, “and the background actually has three different levels: you see people and you see the painting, and the painting becomes part of the show. This is really nice, too.”

The digital backdrops, using state-of-the-art graphics technology, “are magical windows to different realms,” states Shen Yun’s website. “From vast open grasslands in one dance to the stately elegance of Tang Dynasty pavilions in another; from dusty yellow battlegrounds to tropical beaches to Himalayan peaks to picturesque scenery of the Yellow River Delta—the digital projection infinitely expands and transforms the stage.”

Rare for a performing arts company in this day and age, Shen Yun’s dancers are accompanied by a full orchestra, which melds classical Western and traditional Chinese instruments, such as the gong.

In the end, Mr. Alder left with lasting impressions from the performance.

“I like that this shows the Chinese culture is 5,000 years old,” he said. “And so the politics change, but the culture is stronger actually than the politics—that’s the message I like.”