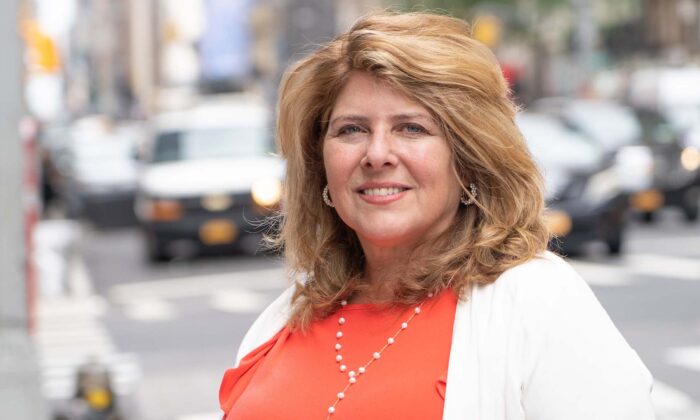 Naomi Wolf, author of “The Bodies of Others: The New Authoritarians, COVID-19 and the War Against the Human," in New York on June 7, 2022. (The Epoch Times)
Defending America

Columnist Naomi Wolf, author of “The Bodies of Others: The New Authoritarians, COVID-19 and the War Against the Human,” asserts that after two years of pandemic policies, people in free societies are behaving more like those in authoritarian societies.

“A handful of bad actors” including the Chinese Communist Party (CCP), Big Tech, and the World Economic Forum (WEF) used the pandemic to “exploit the crisis in such a way as to reengineer our free democratic open societies, especially in the West, especially in the United States, into a post-free society, a post-humane society,” said Wolf during a recent interview on EpochTV’s “American Thought Leaders.”

‘We Don’t Have America Anymore’—Dr. Naomi Wolf on CCP-Style Technocratic Authoritarianism in the US

The Biden administration in April extended the 2-year-old coronavirus public health emergency for another 90 days.

Wolf said, based on history, the ongoing lockdowns and extension of the public health emergency indicate society is in the last phase of a tyrannical takeover, because with emergency powers, laws protecting liberty can be suspended.

According to Wolf, there are 10 steps every tyrannical government has followed. We are now at step 10, said Wolf. Some of the other steps include demonizing whistleblowers and critics, calling dissent “treason,” “espionage,” or “subversion,” and controlling the media narrative.

During the last two years of lockdowns and mandates, Big Tech and the elites have profited while the average Americans have seen the American Dream slowly “closing” on them, she said.

“And so often, when a democracy is dying, or a regime is turning the screws on freedoms to create an established new form of tyranny, it happens intentionally in a very incremental way,” said Wolf. “And you really see this from 1930 to 1933 in Germany.”

She said humanity is witnessing the formation of a two-tier society of the vaccinated versus the unvaccinated, in which people who would never discriminate against others based on categories of race and sex are now discriminating against the unvaccinated.

“Suddenly, they’re happily embracing a discrimination society in which some people are cast as clean and valuable members of society and other people are ostracized and marginalized and ‘othered’ and described as sort of dirty and causing infection to others,” said Wolf.

She argues that big tech companies had an active role in creating these perceptions and in “shaping legislation and certainly in presenting the drama of COVID and lockdowns to us, and then the vaccine rollout, in such a way as to change human behavior and to change human society,” said Wolf.

Wolf cited the emails between Dr. Anthony Fauci and Meta Platforms CEO Mark Zuckerberg discussing Facebook’s role in getting the right public health “messages out” during the lockdowns.

People had no choice but to rely on tech platforms while they were locked down, and Big Tech used that to manipulate the public, said Wolf.

“What I do trace in the book is how there was a vast profit that tech companies made by suppressing human assembly, by helping to message that it was unsafe or unlawful to gather in person,” she said. “And when you understand that big tech companies are competing with human beings gathering in human spaces, you understand why there was a vested interest in suppressing human assembly.”

Wolf thinks big tech companies will not stop at just harvesting data on the computer, but that they want to dominate peoples’ bodily autonomy with vaccine passports.

“What these companies want more than anything is to leave the parameters of your computer and to colonize other currently non-colonized spaces, notably the human body,” said Wolf.

This would give these companies and governments the ability to switch off peoples’ access to commerce, travel, and other goods and services if they did not comply with a particular mandate, Wolf added.

Some forms of digital tracking and surveilling are already here in the United States, she said.

“You’re now expected to swipe these QR codes just to see the menu, or just to get in. And the QR code uploads your data to a central database,” she said, adding that she’s seen the software “that maps the relationships of everyone sitting at that table, and then builds databases and networks of relationships.”

Wolf said that on a scale of one to 10 on the Chinese social credit system, the United States is currently at a three.

“There’s a change that’s happened in American cities in the last two years,” she said.

Because most people around the world, particularly in U.S. cities, use digital apps to travel, do banking, and shop, a digital social credit system similar to China’s is imminent, she said.

Our data is being harvested and used by the “global technocratic elite” to control human behavior, said Wolf.

“We’ve assumed that the worst it can be is data are harvested from us with everything that we choose to do using our free will as human beings,” said Wolf.

The pandemic has revealed how this type of digital control is playing out, because humans, before the prevalence of digital technology, did not choose to “socially distance” to fight pandemics, said Wolf.

“The dream of our digital overlords is for technology to tell humans what to do, and that’s exactly where we’re at,” said Wolf.

While some people might label her a conspiracy theorist, her opinions are based on a long career as a journalist, political consultant, and now tech CEO, Wolf said. Furthermore, she has witnessed firsthand the powerful elites making historical decisions under the radar, she said.

Wolf was well acquainted with this group of powerful people until recently when she was ejected from their circles for writing oppositional pieces on lockdowns.

“But it’s really true that the global technocratic elite have more in common with each other than they do with their fellow Germans or Americans or Russians or Chinese, and they now are able to align above the level of nation-states,” she said.

For example, one of the WEF’s goals is to make nation-level decision-making less and less important, and the World Health Organization’s goal is to make public health decisions on a global scale, bypassing countries’ own authorities via the pandemic treaty, said Wolf.

“These technocratic elites really do believe that they can order the world better than you and I and that they have the right to,” she said. “That’s really scary.”

Little by little, humanity’s tolerance for cruelty and authoritarianism has grown.

“The war wasn’t just on us as a political entity, the war was on American culture, and is on American culture,” she said. “And they’ve succeeded largely, unless we wake up, because we were a kind, decent, inclusive culture that respected other people’s boundaries and freedoms. … And now a CCP-style cruelty is something that we tolerate.”

What people believe is largely determined by the news they consume, said Wolf, and many people only watch news outlets that give a skewed picture of pandemic treatments and policies, largely funded by wealthy people like Bill Gates.

“I do trace in ‘The Bodies of Others’ how millions of dollars flowed and are flowing from entities like the Bill & Melinda Gates Foundation to the BBC and the Guardian and NPR and other formerly very credible, objective news outlets.”

Because most people get slanted news coverage, the country is more divided and many people on the left refuse to consider any other narrative or look at primary source documents, because they believe only government sources are giving them “scientific” information, said Wolf.

This skewed messaging has been able to convince people that the mandates and lockdowns are more American and important than liberty or critical thinking.

Wolf said the most brilliant aspect of the pandemic messaging was that it was framed altruistically.

“You know, ‘You’ve got to exclude those people for the good of the community,’ or ‘You’ve got to mask yourself and your child to save your child,’” said Wolf. “This really brilliantly upended American culture because it cast freedom as selfish.”

Now that those in power have effectively conditioned people to be fearful and submissive, they can keep reinstituting emergency powers, she argued.

Wolf said although the situation is dire, people can do something to push back against this tyranny by being informed about what is really going on in the country, assembling in groups, and getting involved politically on the local level.

As it stands now, “I will say that each side is being fed narratives and stereotypes about the other that would persuade each side that the other is absolutely insane and dangerous, dangerously insane,” said Wolf.

“I get that conservatives think, ‘liberals don’t know what a woman is.’ That is not actually literally true, and liberals think ‘conservatives all want to torch our democratic processes, storm the Capitol, and are misogynist, racist thugs who are trigger happy,” said Wolf.

The last two years have conditioned people to fear each other and so the conversations that would have normally occurred when people gathered are not happening and keeping the country divided, said Wolf. She said she will gladly talk to people on the right.

“People I love think I’m doing something wrong in even talking to conservatives and libertarians. That’s very dangerous. The left, especially, has decided that you’re morally complicit if you have a conversation across the aisle,” Wolf said. “That is censorship, that is cancel culture, that’s un-American, that is an importation from Communism.”

She urges people to remember what makes America unique and a beacon to other nations: to remember we are the great experiment where neighbors talked to each other, listened, and didn’t “rat” each other out if they did not agree with each other, Wolf said.